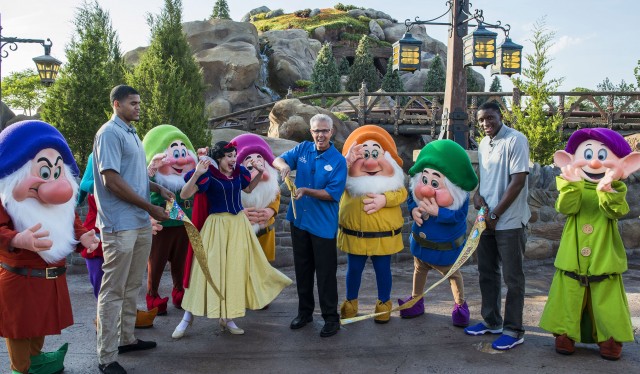 As the crowning jewel of New Fantasyland – the largest expansion in the history of Magic Kingdom – the Seven Dwarfs Mine Train is a rocking, rollicking coaster that immerses guests in the lovable world of Sleepy, Doc, Grumpy, Bashful, Sneezy, Happy and Dopey. Inspired by the classic Disney animated film classic “Snow White and the Seven Dwarfs,” the attraction sends riders on a playful musical adventure into the mine “where a million diamonds shine.”

Featuring an innovative, first-of-its-kind ride system, guests boarding the Seven Dwarfs Mine Train pivot back and forth during twists, turns, hills and drops. Guests are transported through magical mountain scenery and a glowing mine with scenes of the Dwarfs and frolicking forest creatures.

Music from the film classic accompanies the journey. Seven Dwarfs Mine Train features spectacular Audio-Animatronics – with cars slowing down so guests can spot favorite characters making an appearance in different scenes.

At ride’s end, the cottage of the Dwarfs, replicated from the film to exacting detail by Walt Disney Imagineers, comes into view with a dancing Snow White visible through a window.

Guests can reserve access to Seven Dwarfs Mine Train with FastPass+ in advance of their visit to Walt Disney World Resort using MyDisneyExperience.com a component of MyMagic+.

The magic that breathes life into the new Wizarding World of Harry Potter is powered by cutting-edge technology.

Cast members from the hit film franchise reprised their roles for interactive experiences in the new Wizarding World of Harry Potter Diagon Alley.