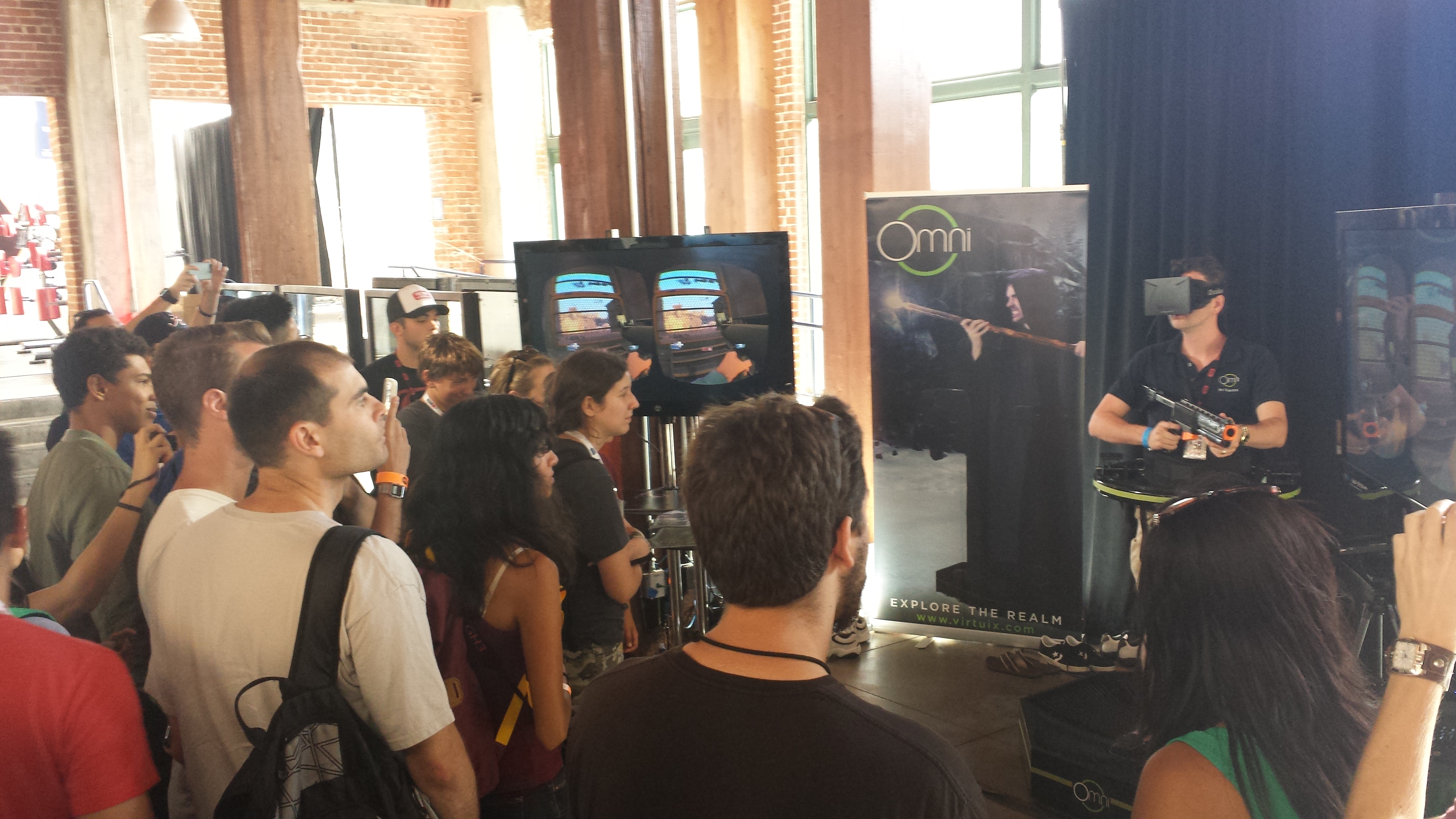 Nerd HQ, presented by Zac Levi’s The Nerd Machine, will return to Petco Park in San Diego July 24-27. The four-day event provides fans a free nerdy hangout during the annual pop culture convention. This year guests can expect an expanded “Conversations for a Cause” panel series, more fan-focused interactions and exclusive gaming opportunities showcasing never-before-seen titles. Nerd HQ 2014 is proudly sponsored by Sega of America, Maker Studios, Intel and Catan Anytime powered by Internet Explorer. Additionally, Nerd HQ has partnered with Facebook to provide interactive experiences to connect fans both at the event and at home with all the action happening at Nerd HQ. Nerd HQ is also supported by amazing fans who contributed to Nerd HQ through a crowd-funding campaign earlier this year. Their amazing loyalty to the Nerdolution has helped make this year’s event possible.

Whether looking for a home-base to relax or meeting friends for some fun, NERDHQ offers something for fans of all ages. The philanthropic panel series “Conversations for a Cause” has been expanded to include over 300 fans. Taking place on a stage constructed in the stands of Petco Park, the panel series has played host to some of the biggest names in pop-culture including Joss Whedon, Seth Green, Richard Madden, Tom Hiddleston, Stan Lee, Lucy Liu, Zac Quinto, Felicia Day, Scott Bakula, Tatiana Maslany, Vin Diesel, and Guillermo Del Toro just to name a few. This year NERDHQ is proud to welcome back “returning nerds” Evangeline Lily, Jared Padalecki, and Adam Baldwin. The “Conversations for a Cause" series is further expanding its reach with first time appearances by Jeff Bridges, Norman Reedus, Andrew Lincoln, Brenton Thwaites and with cast appearances by The Walking Dead, The Giver, and many more. Tickets for panels are $22 and all funds raised through panel ticket sales go directly to support Operation Smile in its mission to help improve the health and lives of children all over the world.

Nerd HQ is making it easier for guests to be plugged in to all the fun and excitement by launching the Nerd HQ App. Designed to give the fans more access than ever before, the Nerd HQ App has a complete schedule of “Conversations for a Cause,” Maker Stage events, parties, maps, and more. Also included are links to buy tickets for the panels, push notifications that will inform users of special events like the "Smiles for Smiles" photo opportunities and even a #hashtag feed for all #NerdHQ posts. Once downloaded and registered at Nerd HQ, guests will receive a collectable Nerd HQ wristband and the Badge of the Nerdolution. Fans will receive up to the minute news and updates of happenings at Nerd HQ. They will also be eligible for various exclusive incentives and prizes only available to registered visitors. Direct links to all of Nerd HQ’s various sponsors as well as one to the donation page for Operation Smile will also be available. The Nerd HQ App can be downloaded for iOS and Android.

Nerd HQ will be the home to Sega for this year’s Con. For the first time, the game publisher will have playable builds of its E3 games for the public, including Alien: Isolation, Hatsune Miku: Project DIVA F 2nd and two titles under the new Sonic Boom franchise – Sonic Boom: Rise of Lyric for the Wii U system and Sonic Boom: Shattered Crystal for the Nintendo 3DS hand-held system.

Guests seeking opportunities to have the nerd scared out of them will be able to play Alien: Isolation, a first-person survival horror game capturing the fear and tension evoked by Ridley Scott’s 1979 classic film, Alien. Players find themselves in an atmosphere of constant dread and mortal danger as an unpredictable, ruthless Xenomorph is stalking and killing deep in the shadows. Underpowered and underprepared, you must scavenge resources, improvise solutions and use your wits, not just to succeed in your mission, but to simply stay alive. Alien: Isolation will be available from October 7, 2014, for Xbox One, PlayStation 4, Xbox 360, PlayStation 3 and Windows PC.

For Sonic fans, Sega will debut Sonic Boom. For more than two decades Sonic the Hedgehog has been one of the world’s biggest gaming icons, with over 70 video game titles, four animated series, and an extensive global merchandising line to his name. This year SEGA introduces a new branch of the Sonic universe, entitled Sonic Boom, that will launch new video games exclusively for the Wii U system and the Nintendo 3DS hand-held system, the first-ever CG animated television series, and a new toy line anchored by master toy partner TOMY. The creative driving forces behind these projects are working together with SEGA to kick-start a global campaign for Sonic Boom that will excite and engage new and existing fans across a variety of platforms.

Makers Studios will have an exclusive stage at this year’s NERD HQ. In conjunction with Maker’s gaming network Polaris, the Maker Stage will feature performances and panel discussions from various partners including Dodger, Stampylonghead, Jon Tron, Markiplier, Jesse Cox, The Game Grumps, CaptainSparklez, and iBallisticSquid among others, with appearances by comedy and lifestyle talent including KassemG and Amy Pham. Everything from Polaris by Maker @ NERD HQ will be featured as a post event digital experience on Maker’s proprietary web platform Maker.tv. Get all the updates from Polaris by Maker including exclusive giveaway and surprises by following #MakerLIVE.

Intel will be at Nerd HQ featuring some of the newest cool and nerdy technology devices on the market today.  Attendees can create custom green-screen photos with Intel-based tablets, enter for a chance to win over $40,000 of remarkable prizes and get their hands on exclusive discounted offers. Fans will also have a chance to see what it is like to be “connected at 30,000 feet,” playing entertaining games on incredibly powerful and innovative tablets, 2 in 1 devices, and portable all-in-one PCs.

Facebook will bring their social networking power directly to fans at Nerd HQ.  To enhance the fan experience, Facebook plans to unveil a new activation; the innovative Facebook Fan Question Station. For the first time, comments from the Nerd Machine Page will be sourced and the Facebook Fan Question Station will randomly select fan questions for talent to answer in the NerdHQ green room. Talent will select questions by shaking the device and then recording video responses that will then be posted on the Nerd Machine Page. Not only will this provide those at home a way to experience the excitement at Nerd HQ but will also enable the talent to directly engage with their most loyal fans.

Finally, what is Nerd HQ without a dance party? Back by popular demand is the Nerd HQ Fan party held on Thursday, July 24. All are welcome to this incredible night of dancing and fun.

The Nerd Machine is a multimedia company dedicated in bringing its global clientele the best of apparel, accessories, software, hardware, music, and both long and short form video content.

“We not only put a premium on customer satisfaction and input but also collaboration, as we believe that some of the very best ideas may come out of the very community we serve,” said Levi, who’s best known as Chuck from the NBC TV series. “Our goal is to nurture an environment where community interaction thrives, creating the best and most forward thinking products available on the market. And, philosophically speaking, spearheading a "mission of redefinition" that changes the global perception of what a nerd is, and thereby allowing everyone to celebrate the nerd in themselves. The question is: What are you nerdy about?”