Just in time for Christmas, one of the most beloved and iconic super heroes of all time reemerges in The Amazing Spider-Man comes to Blu-ray 3D, Blu-ray, DVD and UltraViolet on Friday, November 9 from Sony Pictures Home Entertainment. Presented for the first time in at-home 3D, the reboot tells the story of teenage Peter Parker, who grapples with both high school and amazing super-human crises as his alter-ego Spider-Man battles The Lizard. 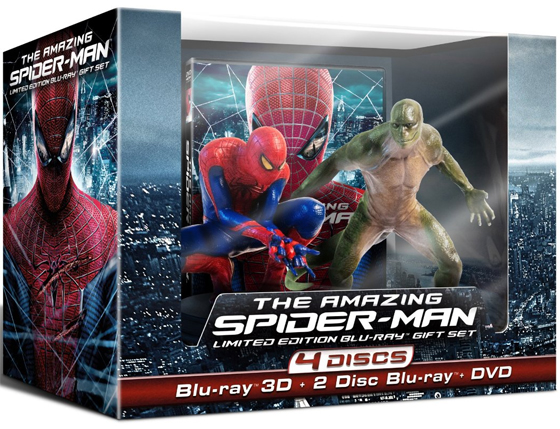 Disc one is a Blu-ray containing the feature film, as well as the Amazing Spider-Man Second Screen App, which can be used with the Sony Tablet S, Xperia Tablet S and iPad. The App syncs with the film as it plays in Timeline mode and features Production mode allowing users to sling content from their tablets to the TV screen for a greater and more interactive HD experience. Content includes interviews, storyboards, concept art, pre-visualization sequences, stunt rehearsals, and more.

Disc two is a Blu-ray featuring 90 minutes of behind-the-scenes documentaries, taking viewers behind the scenes of the development and direction of the film, casting, costumes, location shoots, visual effects, and more.

Disc three is a DVD that includes the feature film, as well as stunt rehearsals and deleted scenes, The Oscorp Archives, an image gallery featuring production art stills, and audio commentary with director Marc Webb, and producers Avi Arad and Matt Tolmach.