6 Tablets To Keep You Gaming 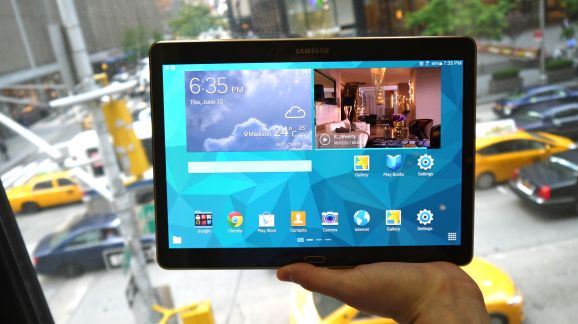 With back-to-school time just around the corner, tablets remain an essential part of education at any grade level these days. But there’s no reason that students can’t study hard and then play hard on the very same device. Here are five tablets that are great all-around multimedia devices, but excel as game machines for on-the-go or big screen gaming experiences.

Apple introduced the tablet to gamers with the original iPad. And thanks to Moore’s Law things have been progressing at a record pace. There are over 500,000 apps available for iPad on iOS7 with a large percentage of them games. Although a new iPad is rumored to be just around the corner this fall, the iPad Air is a can’t miss for Apple enthusiasts with its crisp 9.7-inch Retina display and thin, light design. Precision-engineered to weigh just one pound with a narrow bezel, the borders of iPad Air make gaming content even more immersive. The Apple-designed A7 chip with 64-bit desktop-class architecture ensures games of all genres and sizes run fast and for almost 10 hours on one charge. The tablet also comes with ultrafast wireless access through its built-in WLAN. With a huge catalog of exclusive games, including Epic Games’ “Infinity Blade” franchise, Apple is still a leader in the tablet game.

The Galaxy Tab S is Samsung’s thinnest and lightest tablet to date. This Super AMOLED tablet delivers incredible gaming experiences through Google Play by offering more realistic imagery with darker blacks, brighter whites and a 100,000:1 contrast ratio. The Adaptive Display intelligently adjusts everything from sharpness to saturation based on the app being used, which means your games will look awesome indoors or even outside without any adjustments necessary. The device comes with an Ultra-Power Saving Mode that ensures that playing games won’t drain all your power for when you want to multi-task. Users can surf the web, watch videos, share content and make calls simultaneously without having to worry about closing out of one to access another. The tablet comes in two sizes, a 10.5 inch and an 8.4 inch model, with both models featuring a sleek 6.6mm profile. And it’s available in Wi-Fi and LTE versions.

Nvidia already has one of the best portable gaming devices on the market with its Shield, which features a smaller screen, a Tegra 4 chip and a connected console-style controller. Now the chipset maker is introducing the Shield Tablet with a larger 9-inch screen, the brand new Tegra K1 processor and a wireless controller. It’s one of the first devices to feature Tegra K1 technology, which brings the mobile space up to high-end PS3 and Xbox 360 console experiences. Designed from the ground up (and manufactured) by Nvidia, this device was built for gaming. It features Gamestream technology to stream PC games like “Titanforce” from any GeForce GTX powered PC to the device, or you can turn the tablet into a console through Console mode and play games on your 1080P big screen HD TV. Gamers can utilize ShadowPlay, for game capture and streaming. The front speakers bring the gaming sound to life. The tablet comes with Trine 2 built-in, which showcases the power of Tegra K1 technology. For the price, there’s not a better gaming tablet out there.

Samsung has given its popular large tablet an upgrade with new features that bring games to life like never before. With new Intel technology and quad-core performance (featuring ARM technology), games like Gameloft’s “Asphalt 8: Airborne” reach excessive speeds with no slowdown on the WQXGA Super clear LCD 10-inch display. The large, bright screen delivers four times the pixel density of the original Galaxy Note 10.1, which is perfect for gaming, movies and entertainment. When not playing games with the super-responsive touchscreen or via a wireless controller, the tablet includes a detachable keyboard and an updated S Pen with features such as Action Memo, Scrapbook, Screen Write and S Finder. The device’s screen size opens up enhanced multitasking, including the ability to draw a window of any size on the screen, and instantly access unique in-application features such as YouTube or calculator. Everything’s protected by Samsung’s Knox technology.

The newest Asus Transformer Pad runs on Intel's 64-bit quad-core Atom chip and features a 10.1-inch 1280 x 800 IPS display for playing any of the growing library of Google Play games. The screen, while not HD, offers great visuals and images are easy to see from multiple angles. The new 2014 Edition sports a pair of stereo speakers in the front to further immerse players in their gaming experiences. The tablet runs on Asus proprietary ZenUI (user interface), which sits on top of Android 4.4 and adds over 1,000 upgrades to the Android OS. This tablet is light and durable and features a cool textured shell. This budget-priced tablet also comes with GPS circuitry, Bluetooth and Miracast (which can broadcast your content to an HD TV through an additional $50 adaptor.)

This Windows RT device packs a lot of power into a light and portable package (only 8.9mm thick weighing just over a pound). Nokia’s latest tablet features a high definition 1080p, 10.1-inch screen that’s made of Gorilla Glass 2 for durability. The bright screen, which offers less reflection, is perfect for playing exclusive games only available on this device like DreamWorks’ Dragons Adventure -- a cool GPS-supported game that will keep kids of all ages entertained in the back seat or at home. Qualcomm’s Snapdragon 800 processor brings the large library of Windows games to life with excellent touchscreen support – 343 Industries and Vanguard Games’ Halo: Spartan Assault is one of my favorites. While games drain batteries quickly on any device, this Lumia has a quck-charge that goes from zero to 80 percent in an hour. Adding the Nokia Power Keyboard adds another five hours of battery life, as well as keyboard controls for gaming and two additional USB ports.

During the dog days of the Baseball season, what better way to celebrate the season being too long than with more Baseball!