Dany Chaloub is a emerging writer and a video personality. After working in the design industry for many years designing cars to handbags. He decided to pursue his passion for video games by designing one on his own. From overseeing day to day business and product development at Jack Georges to assisting with interviewing and writing about some of the video game industry most recognizable figures. Dany brings his varied experience in the video game world to GamerHub.TV. 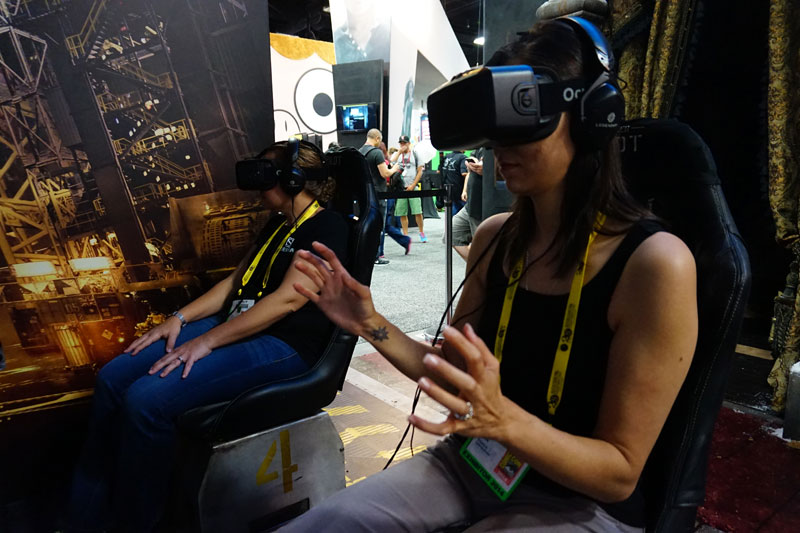 At San Diego Comic Con 2014, Guillermo del Toro was on hand to experience what it would be like to step inside the world of his Pacific Rim movie franchise. Since 3D Hollywood movie experiences can only go so far, Del Toro worked with the technology gurus at Legendary Pictures to create a virtual reality experience for fans attending the convention. Pacific Rim: Jaeger Pilot debuts as a three-minute Oculus Rift experience that literally puts fans inside the head of a towering robot warrior – alongside actor Charlie Hunnam, who reprised his role as Raleigh Becket from the feature film.

“The Oculus was something that I saw from the design, the storyboarding, the sound design, the beta version, all the way to what you see,” said Del Toro, who is an avid gamer and would love to see a full Oculus Rift Pacific Rim 2 game. “That’s something that I would fully and wholeheartedly support.”

Legendary Pictures CEO Thomas Tull was an early investor in Oculus VR, long before Facebook acquired the start-up for $2 billion this year. His company enlisted CG animation company Reel FX to work with the technology. The first look at that R&D was made public at San Diego Comic Con, where three customized chairs were set up for attendees to explore a short virtual experience that was created from the ground up using Epic Games’ Unreal Engine 4 technology and utilized digital assets and effects from Industrial Light & Magic.

“We are big fans of what Epic have been able to achieve over the years with Unreal Engine tech,” said Barnaby Legg, vice president of theatrical strategy for Legendary. “Pacific Rim features one of the most sophisticated visual worlds ever put onscreen, and we wanted Jaeger Pilot to be as true to that world as possible. Seeing the incredible real-time visual fidelity the development community has been able to achieve within Unreal Engine 4, it quickly became our first choice as we went into development on our first virtual reality experience.”

That experience begins once the headset and headphones are placed on the pilot in training. Inside the world, they’re transported into the head of a 250-foot mech, or Jaeger, from the film and Raleigh Becket asks them to be his co-pilot. After going through a few basic drills to enter “the drift” and connect their minds, it’s up to Raleigh and his new co-pilot to take on a towering Kaiju nicknamed Knifehead. While the short demo doesn’t include any interactivity at this point, the groundwork has been laid for a very cool experience should controller support or even motion-sensor technology like Kinect be added in the future. The studio has until 2017 to expand the experience, which is when the second Pacific Rim movie will hit theaters.

“The form matches the function,” said Legg. “What fans will go through in the VR experience is very analogous to what the Jaeger Pilots go through in the movie, by going through ‘The Drift,’ a neural control system that fuses the consciousness of the pilot with the biotechnology of the giant robot. This fusion of consciousness and technology reflects perfectly the experience of the user within the virtual reality goggles. These kinds of ideas are very powerful — and resonate with today’s world, in which technology is continually removing the barriers between entertainment and our senses.”

The project kicked off in March, which meant the team was able to utilize Oculus DK2 technology. Between Legendary, Reel FX, Oculus VR and ILM, close to 50 people were involved. Epic was involved throughout the process, as well.

“We’ve been friends with the Epic guys for a while, and they helped out with the final code, helping us tweak and optimize the engine for maximum performance,” said Legg. “Clearly, no one knows UE4 like they do.”

The man who created this franchise, Del Toro, was in the loop from the project’s genesis. The team worked with him on the storyboards, the script, Hunnam’s dialogue, and the visual landscape of the piece.

“Guillermo is so passionate about this universe, and his fingerprints are on everything,” said Legg. “He also has a great instinct for interactive experience like games, so it was fantastic to have his insights.”

Reel FX was able to use UE4’s Blueprint visual scripting to quickly prototype and iterate the VR experience. Legg said the team was masterful in the way they rendered the Pacific Rim universe within Unreal Engine 4, making the entire process look easy.

“Unreal Engine 4 is incredibly dynamic,” said Legg. “If you look at the way the shaders, the lighting and the particle systems have evolved, it’s incredibly impressive. As always, the finished experience is the sum of its individual parts. Every piece has a part to play -- the way light reflects across the armor of your co-pilot, the way steam rises from the exhaust ports inside the Jaeger’s Conn-Pod, the way the sparks shower and scatter when Knifehead breaches through the visor shield. Working in VR, you need to design in 360 degrees, and the Unreal Engine helped us ensure that, whichever direction the user was facing, the view was going to be amazing.”

While Unreal provided the base on which this VR experience was constructed, ILM were the first people Legendary looped into the project. Legg said they opened up the extraordinary archive of digital artistry they had created for the film, and were able to provide all the core assets as direct reference for the Reel FX team.

Brendan Iribe, CEO of Oculus VR, was on hand at Comic Con to watch Del Toro and media preview the VR experience. Legg said the real hook on this project was the Pacific Rim universe, and Oculus were as excited as Legendary about getting to render this unique visual landscape within the Rift, and give VR fans the epic empowerment of piloting a 250-foot Mech.

The new subscription model Epic introduced in March makes it easier for Hollywood studios to experiment with VR. Epic has worked closely with Oculus VR from the start-up’s inception to ensure UE4 support.

If Pacific Rim: Jaeger Pilot is any indication of what Hollywood creatives can do with Oculus and UE4 in five months’ time, it will be exciting to see what additional development time opens up for VR experiences that immerse fans completely within the movie universes they love.