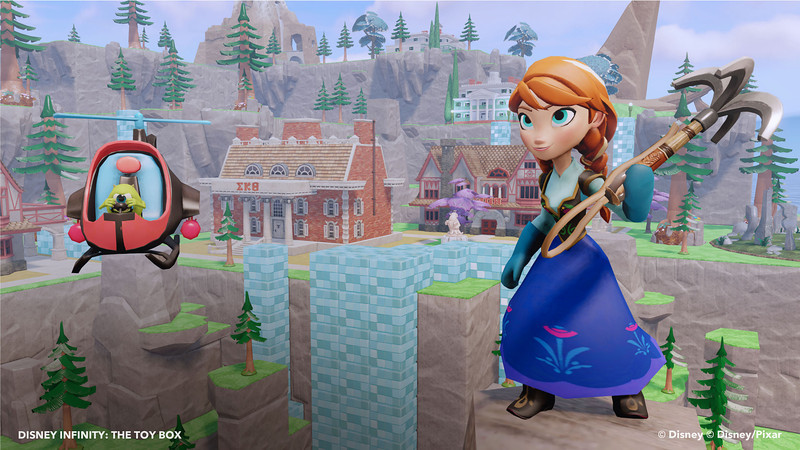 If you have kids, especially girls, the odds are you know the lyrics to every song from the Oscar-winning Disney Animation Studios film, “Frozen.” Disney has been busy keeping its franchise hot long after the traditional Blu-ray/DVD release (including a “Sing-A-Long Version”) and the Starz cable debut of the film.

Gamers can play with “Frozen” characters Anna and Elsa in the Disney Infinity video game. These two characters were introduced before the film went on to grow $1.2 billion to become the biggest animated movie of all time. Players can use these characters in the Toy Box mode of the game, which allows fans to mix Frozen characters with past Disney Animation Studios characters like the video game-themed “Wreck-It Ralph” and “Tangled,” as well as Pixar characters from movies like “Toy Story,” “The Incredibles” and “Monsters University.”

Disney Interactive and Harmonix are giving gamers three new playable songs, including “Let It Go” from “Frozen” if they pre-order “Disney Fantasia: Music Evolved” for Xbox 360 and Xbox One, which ships October 21. The song featured in the new interactive music experience was sung by Demi Lovato.

There are also a number of mobile games out there featuring the characters from the film, including the match 3 game, “Frozen Free Fall.” But that’s just on the video game side. This fall ABC is bringing Else into the real world as actress Georgina Haig stars as Elsa in the hit TV series, “Once Upon a Time,” which is set in Storybrooke and allows Disney characters from different fairy tales to converge in an original episodic storyline.

Disney is working on a film short sequel, “Frozen Fever,” which will debut next year and feature a new song written by Kristen Anderson-Lopez and Robert Lopez. And the original cast of the film, including Idina Menzel, Kristen bell and Jonathan Groff, will reprise their roles.

There’s also a “Frozen” musical in production, but no release date has been announced. This show will follow in the footsteps of the new “Aladdin” musical and past hits like “Beauty and the Beast” and “The Lion King.” “Disney on Ice Presents Frozen” is currently touring the country, to keep the fans happy (and cold).

Speaking of cold, Disney World Resort has just extended its “Frozen Summer Fun Live!” at Disney’s Hollywood Studios through September 28. Fans of “Frozen” have been flocking to the flurry of fun at Disney’s Hollywood Studios since July 5, enjoying immersive experiences like the “For The First Time in Forever: A ‘Frozen’ Sing-Along Celebration” and ice skating (on real ice) inside Wandering Oaken’s Trading Post & Frozen Funland.  Anna, Elsa & Kristoff are also welcomed by guests daily in an 11 a.m. processional down Hollywood Boulevard while ice cutters, skaters and skiers join the cavalcade. Disney will extend the ice rink and add more snow to the attraction throughout the year.

I first saw “Frozen” in 3D on the Disney Magic ship, which was recently redesigned to include new interactive features. Anna and Elsa are now part of the live action Princesses Meet & Greet on all four Disney cruise ships with 7-night cruise itineraries. They’re also the most popular princesses inside the Magic Kingdom’s new Princess Fairytale Hall, which is located in New Fantasyland.

I was also able to experience “Frozen Summer Fun Live!” this July. Given how hot it gets in Orlando during the summer, the Wandering Oaken’s Trading Post & Frozen Funland offered a cool relief from the heat. The full-sized ice skating rink was an excellent idea, and a great way to get some exercise while staying cool on the Arendelle ice. The sound stage also features real snow for building your own Olaf as well as plenty of areas to snap cool photos, including interactive experiences featuring characters from the film.

In the evening every weekend, a live band and DJ take the stage to celebrate “Frozen” summer fun with contemporary songs and a few familiar tunes from the film. Anna, Elsa a virtual Olaf and other characters from the film take the stage after the warm-up and sing some of the smash hits from the movie. There’s also a fireworks show built into this magical experience. This is open to all guests, but VIPs get free “Frozen” desserts and drinks (alcoholic and non-alcoholic) in a special buffet set up in front of the stage.

Over at the Magic Kingdom, Anna and Elsa appear in the new daytime “Disney Festival of Fantasy Parade,” which will run beyond September 28. In addition, The “Celebrate the Magic” nighttime projection show transforms Cinderella Castle with magical visuals from “Frozen.” Disney will launch new “Frozen” activities throughout the fall to keep fans happy.

In addition,  the Norway Pavilion at EPCOT is getting a permanent “Frozen” attraction, which will replace “Maelstrom.” The new attraction will take guests to Arendelle and immerse them in many of their favorite moments and music from the film. The pavilion will also include a royal greeting location where Anna and Elsa can meet guests.

There’s no end in sight for “Frozen,” whether it be video games that offer endless play time or new live experiences. Plus, you can rest assured that a full-on “Frozen” sequel is in the works over at Disney Animation Studios.