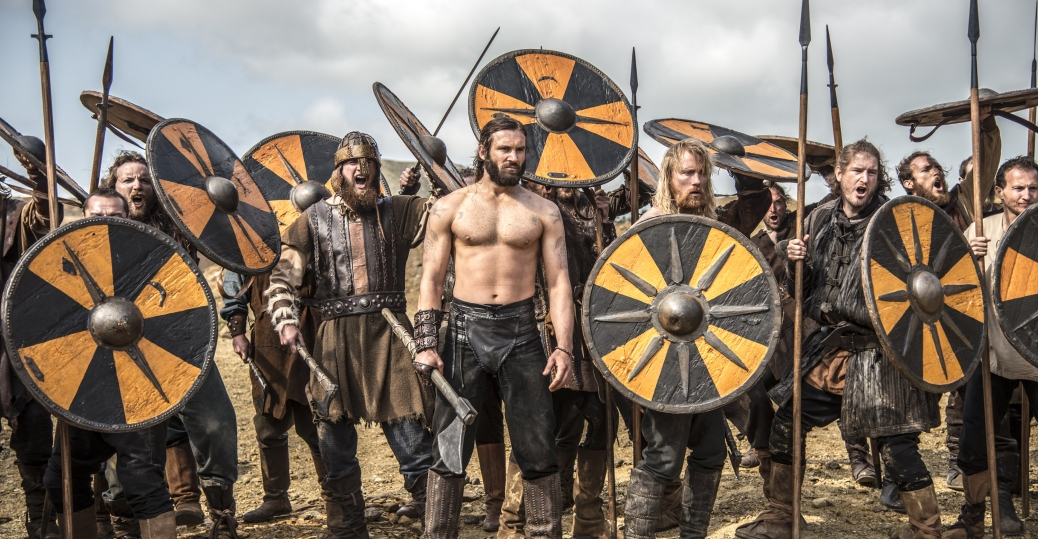 ASHFORD, Ireland -- Michael Hirst knows how to make history entertaining. The executive producer and writer behind Showtime’s “The Tudors” has a new hit TV series with History Channel’s “Vikings.”  The second season of the show is now available on Blu-ray and DVD  from Fox Home Entertainment and the third season will debut in February 2015.

“Vikings” destroys many of the myths that Hollywood has embraced over the years about the Icelandic conquerors who built sturdy ships and guided them to new lands in honor of their gods.  The show, which was one of the most expensive undertakings for History Channel and one of the rare non-reality series on the network, blends the legendary tales of Norse ruler Ragnar Lothbrok and Norse nobleman Rollo with real Viking history and an entertaining story that spans many decades.

Those who haven’t yet dived into this show can binge watch the home video offerings easily, as each season encompasses 10 episodes. The series has Hirst’s trademarks, including bloodshed, sex and strong characters.  Filmed in Ashford, Ireland, about two hours south of where “Game of Thrones” is shot, “Vikings” has spawned Ashford Studios and a new film industry on the East Coast of the Emerald Isle.  “Vikings” is shot just 45 minutes east of Dublin, a city founded by real Vikings.  Hirst talks about Vikings and video games in this exclusive interview from the set of the third season of the show.

What’s it been like bringing the history of the Vikings to live through this TV series?

Bringing the Vikings to life is something that I wanted to do for a very long time and so it’s an exquisite agony.  It’s wonderful because I’m working with a lot of extremely talented people who build these sets, and make these costumes and create this world, who make my words come real.  It’s a sort of agony because of the effort of writing all the episodes, but it’s been the best thing I’ve ever been involved with personally as a writer.  Working with this crew here in Ireland at this new studio with people -- many of whom I think of as geniuses – has made me very happy.

What do you think it is about the Vikings that has stood the test of time that we’re still interested in them today?

We’re interested in the Vikings because they left a huge residue, not just across Europe, but across the world.  Russia is called Russia because of Russ Vikings.  I grew up in St. York in the north of England which is a Viking town.  Dublin here in Ireland was built by the Vikings.  At one stage, the Vikings ran just about the whole of central England.  It was called the Dane Law and as the word suggests, they gave us some of our laws.  They gave us a lot of our language.  They gave us a lot of expressions.  They gave us, and the French.  Normandy is called Normandy because it’s the Land of the North Man.  They spread themselves out.  They discovered North America hundreds of years before Columbus.  So we’re interested in them because they did such remarkable things for a Dark Age people.  We’re talking about the 8th, 9th and 10th centuries, so a long time ago.  They got half way around the world in their boats, and no one else at the time could have done anything remotely similar to what they did.  But they also left themselves in the gene pool of most European countries and in fact, oddly enough, in certain African countries, in eastern Europe, all around the world there are Vikings.

Why do you think the Vikings have been so misunderstood?

I think that they’ve had such bad press until quite recently.  The Vikings are always considered to be the maniacs, the uncultured, the Pagans who came in and raped and pillaged and were uncultured.  We had that impression because their history was written by Christian monks.  In fact, they were fascinating, earnest people whose attitude towards women, for example, is much more enlightened than the Saxons or the Francs at the time.  What I’m trying to do with the show is, to some extent, to redeem their reputation, to show that we’ve been living with clichés for too long.  The Viking men loved their wives and parents loved their children, and they were people.  They were human beings.  So there’s a lot of work for the show to do besides being a very entertaining show.

We’ve seen the History Channel and a lot of TV shows expand and have video games based on them.  What would the “Vikings” video game be?

Up to this point, lots of computer games seem to feature Viking-like people and they’re, as I say, always the outsiders.  They’re always the bad guys.  They’re always the people who come in and wreak havoc and kill people without mercy.  I personally love the pagan gods.  From a righteous point of view, they’re gold dust because they’re weird and quirky and wonderful.  Much of the Viking gods are much older than the Christian God.  So I would like a “Vikings” game really to be about the relationship between human beings and gods.