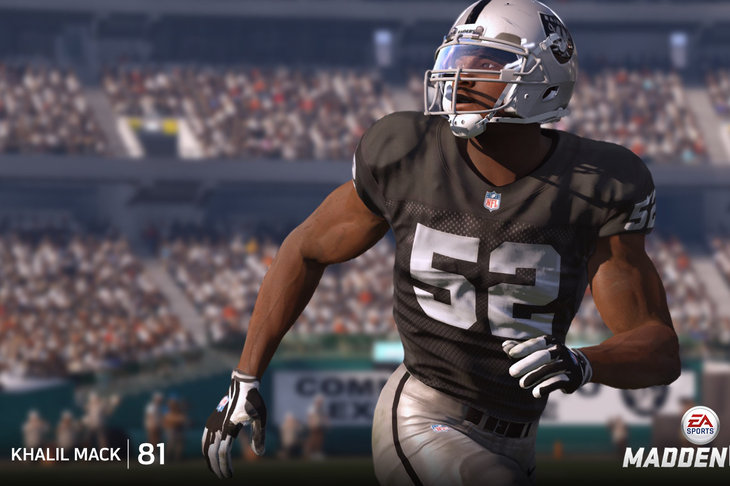 While the Raiders (0-5) are having a horrible start to the NFL season, there is one bright spot among the roster. First round NFL Draft pick Khalil Mack (fifth overall) is continuing his excellent defense work in the NFL that he established playing college ball at the University of Buffalo. The outside linebacker, who holds the all-time NCAA record for forced fumbles and is also tied for career tackles for loss in the NCAA, talks about going virtual in EA Sports “Madden NFL 15” in this exclusive interview.

Oh, it’s a blessing, man, knowing that you’re in it. That was one of the first video games I ever played, and now I’m a part of it.  It’s a blessing.

What were some of your favorite memories playing video games?

Some of my favorite memories were playing against my brother and my Dad and a lot of my friends, man, and losing most of the time because I was terrible. But just knowing that you can be in a video game, that’s exciting?

Do you still pay with your Dad?

Not so much, just because I’ve been in Buffalo for the past five years, but I like to play every once in a while against them when I can.  I played more against my teammates from college and guys that I’ve been around lately.

As a pro athlete, what’s it like for you to become this virtual character in “Madden”?

It’s a blessing just knowing that you can be placed in a video game and rated on speed and all those different things. I never imagined that I’d be in a game, man.  I was in the NCAA game and getting to see myself on there was cool.  But being in the NFL and on “Madden” is taking it to another level.  It’s crazy.

What would you like your player ratings to be?

You want your player ratings to be all 99, you know what I mean?  Why not?  Everything.  Coming off of blocks, speed all that.

What advice would you give somebody who’s playing as your team in “Madden”?

I know our defense is stacked and we’ve got a lot of talent on the offensive side of the ball as well, so I advise people to play with the Oakland Raiders, man. You’re going to win.

What strategy would you employ in “Madden” for the Raiders?

I’d tell you specifically to blitz five or maybe four, but play press with your corners. You can pressure with four down lineman a lot and things like that.  Make sure you pressure with five every once in a while, and bring me up the edge.

How might rookies use Madden to prepare for the NFL season?

You can use “Madden” just to stay in a football mindset. There are a lot of different things you can use as far as like a defense.  You can be an offense coordinator and defensive coordinator when you’re playing against a guy like Derek Carr.  I like to play against the quarterbacks because they’re a lot better in the game and they know different things and they know different situations and it makes you more sharp, man.  It makes you more sharp-minded, especially when it comes to a football perspective, knowing when to down the ball and two minute warnings and all those different things that take place in the game, knowing when to call time outs and different things of that aspect.

Would you use “Madden” to prepare for a game?

No, I wouldn’t use “Madden” to prepare for a game, but at the same time it’s kind of similar in a lot of different ways. If you have to prepare for a certain team, it’s a lot easier to do it that way.

How different is it to play football with all the pressure in real life versus a video game?

I never really thought about it, especially when you compare the two of them -- playing football versus playing “Madden”.  Obviously, in real life you’re out there and you’re playing physically and you’re going against the guys and you really know how strong they are.  You know how to get off of blocks.  You know what it takes to make plays because of certain schemes and certain techniques that they use throughout different situations in the game.  It’s a different when you’re playing in real life and a person playing on “Madden” because you’re actually playing, but in a lot of different ways it’s not so different because of the schemes and how you see things taking place on the field.

Would you rather be on a box of Wheaties or on the cover of “Madden”?