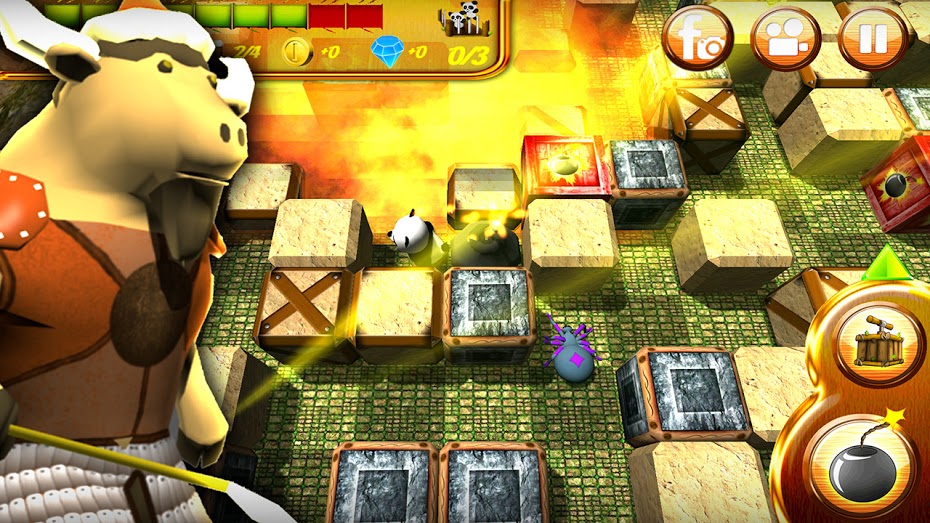 Looking for a game that's a little out of the ordinary? In a season that's flooded with high budget games and reuse the same old formula, here are a few creative gems that you might not have heard of to give you a break from the norm. Best of all, these are all games for Android, some optimized for Tegra devices like the Nvidia Shield Tablet, so you can take them wherever you go.

Those looking for a game similar to Bomberman should look no further than Hero Panda Bomber. You're a giant Panda making its way through a maze with an arsenal of explosives to toss onto enemies. Free-to-play and suited for all ages, Hero Panda Bomber is explosive fun for everyone.

Set in a beautiful artistic 3D puzzle game, Back to Bed, takes place in a dream world where you guide a sleepwalker named Bomb back to his bed. In order to do this, you take the role of a subconscious guardian named Subob. The two travel through surreal dreamscapes, filled with wonder, and objects that will bring Bob back to bed. But be careful, perils are hidden amid the beauty too!

Embrace the thrill of being a crash test dummy in Turbo Dismount, a game that's all about physics, Mr. Dismount, and all the cars that love him. Perform gravity defying stunts, crash into walls, and create huge traffic pileups for the fun of it! There's a ton of vehicles to choose from, multiple obstacle filled levels, and a slo-mo replay system. It's free-to-play, with visuals that are enhanced for the Nvidia Shield, so load it up and get crashing!

Tower defense is all well and good, but as they say, the best defensive is a powerful offensive. Welcome to the world of Anomaly, the world's first and only tower offense game. Battle against an alien invasion of Earth across five different games, using powerful towers and upgrades. Featuring gorgeous graphics and explosions that make full use of Tegra processors, Anomaly takes tower strategy and spins it on its head.

Originally released as a large scale role-playing game for the PC, Mount & Blade: Warband has been fully ported to select Tegra 4 Android devices such as the Nvidia Shield Tablet. Journey through the land of Calradia, a land at war, with riches and dangers awaiting any would-be adventurer. Using courage, skill, and a strong sword, you can make a name for yourself as a warrior, and eventually rule over this land. This deep role-playing game requires a gamepad like the Nvidia Shield Controller to play.

In 2217 CE, Earth is at peace. It's been over a century has passed since the war with alien war machines, and few remember the dangers or the ExZeus robots that saved the planet. But now a new enemy is rising up, and humanity's only hope is to bring back the ExZeus project to fight off the threat. Featuring fast-paced free-to-play action, 3D graphics, robot upgrades and controller support, ExZeus 2 is exactly the kind of game to spend an afternoon or two with.

Step into the abstract with Auralux, a real-time strategy game like no other. Featuring slow paced, cerebral action, players are equipped with only one type of unit, with only one command to issue. All enemies start with equal resources, so fast reflexes won't get you very far. The only way to win is to outthink your opponents. Using beautiful, yet minimalistic graphics and a rhythmic soundtrack, Auralux is a game that one can get lost in, but be mindful of your moves. Choices matter, and only the best strategies will lead to victory.

Alpha Wave embodies the spirit of classic space shooters like Galaga and Asteroids. Survive against 65 waves across 3 levels, with a huge variety of enemies and unique behaviors. Featuring fast, short gameplay, fantastic special effects, and support for gamepads like the Nvidia Shield Controller, Alpha Wave is the perfect game for when you're on the go and can only spend a few minutes at a time playing.

Ported from the PC/Mac version, King's Bounty: Legions is the world's first 3D social strategy game. In it, you have the opportunity to train warriors, outfit them with gear, and use them to beat the snot out of your friends' best fighters. Featuring wonderful 3D graphics, numerous locations and quests, and crossplay with the PC release, King's Bounty: Legions puts your fighting skills to the test. Did we also mention that it's free-to-play? You can battle against your friends and not have to pay any money to do it.

Originally developed for the PlayStation Vita only in Japan, Somioni: Demon Arts makes its way onto Android and optimized for Tegra devices. Use the power of demon ink to rid the world of evil. Touch gestures can create paths for the warrior Agura to stand. Drawings can also be used to attack enemies, obtain hard-to-reach items, or avoid deadly obstacles. Different drawing can also be combined to devastating effect. With a unique combination of artistry and action, Sumioni is experience that is unlike any other.