Darryll Gallagher, head of Crystal Dynamics, has been charged with re-imagining one of the most iconic video game characters of all time. Thanks in part to Angelina Jolie, most people out there, including millions who have never played Tomb Raider, know the name Lara Croft. Gamers have been playing the Tomb Raider games for decades, so rebooting the franchise was a huge undertaking. Gallagher talks about what’s in store with this brand new Tomb Raider adventure in this exclusive interview.

Who is the new Lara Croft?

Tomb Raider is the story of the origin of Lara Croft. Ultimately, she starts out in this particular game as a young 21-year-old girl. She’s fresh from the university. She’s on her first adventure, and she’s out with a group exploring. She’s with a captain called Roth that is a mentor of hers. There’s a huge storm. The boat gets wrecked. She washes up on the shore, and she’s washed up onto an island, basically left alone and having to survive.

How is this Lara Croft different than past?

We put Lara Croft in a lot of scary situations in this game where she has no other choice other than to survive and escape. We introduce the concept of the character before she evolves into what gamers know her as. These situations show her ability to actually use brains over brawn, her smart resourceful intellect. She’s a smart, resourceful lady. Through these experiences, especially early in the game, it’s really about her being ill-equipped and unable to actually get through this space without using her brains, without using physics in the world, without actually manipulating fire, water, mass, buoyancy, and really passing the environment and experimenting with the environment to actually escape the predicament she’s in.

How does she evolve?

She has to go through multiple near-death experiences and ultimately make a dash for life through this first tomb and really escape out of this predicament, come out into the island and see that she’s really not alone. She’s trapped in this place, and this is only the beginning of the journey for her. 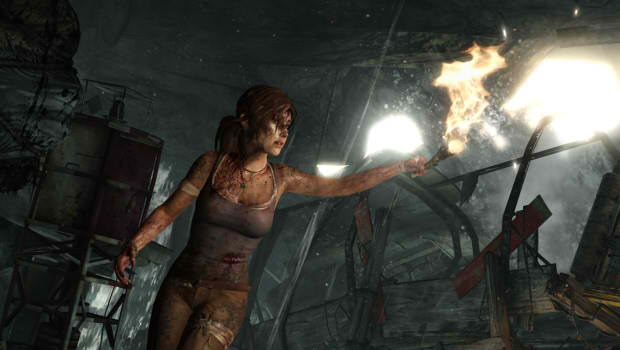