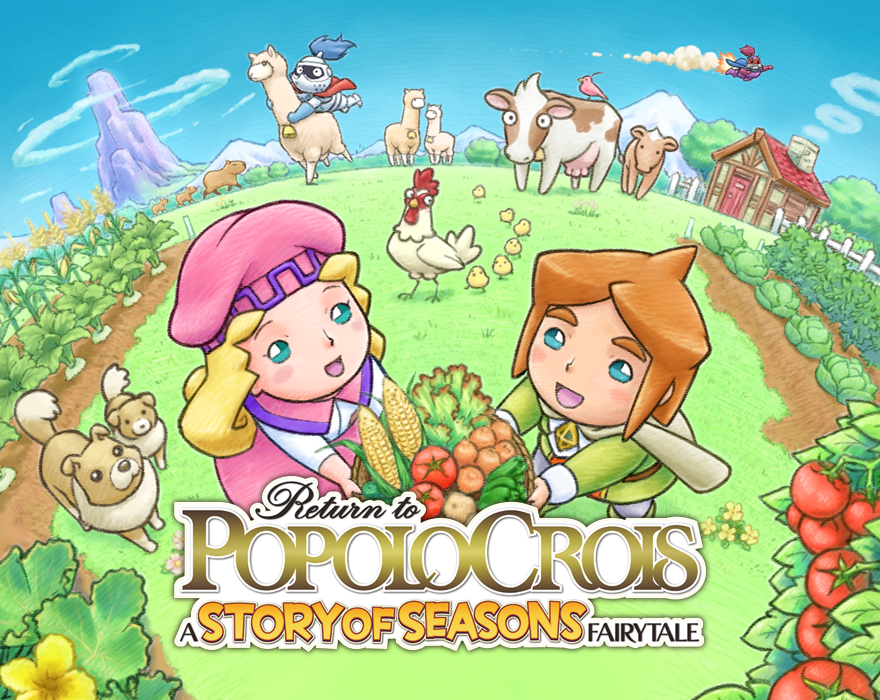 "Without a doubt, E3 2015 will be an action-packed showing for us with Onechanbara Z2: Chaos as well as a pair of games each for the Earth Defense Force and SENRAN KAGURA series," said Shinichi Suzuki, President & CEO of Marvelous USA. "Combined with the long-awaited returns of The Legend of Heroes and Corpse Party, as well as a new crossover entry into the STORY OF SEASONS series, we're extremely excited about our diverse portfolio of games."

With games spanning many platforms and featuring gameplay styles from the action, adventure, brawler, RPG and third-person shooter genres, attendees will take part in supernatural events that range from ill-advised attempts to raise the dead and the consequences thereof, to feuding vampire beauties fending off hordes of zombies, to giant alien bugs invading earth and being held back by force. They’ll also get a taste of fantastical adventures to restore a goddess of light in a storybook land mired by darkness, and take part in the unraveling of a political quagmire from the perspective of an elite student military unit. Plus, the girls of Hanzo and Hebijo return in two titles, battling a plague of demons in one and traveling to another dimension altogether in the other.

XSEED Games will be located in the West Hall, Booth #5212. The following titles have not yet been rated by the ESRB unless stated otherwise.

[Platform: PSVita; Release: Fall2015] – The final installment of the supernatural story that began with Corpse Partyand continued in Corpse Party: Book of Shadows, Corpse Party: Blood Drive ups the ante by allowing players to explore Heavenly Host Elementary in full 3D for the first time, and with a dynamic lighting system aided by an in-game flashlight. New gameplay systems add more exciting interactions for players experiencing the gruesome finale to this tale of an inescapable, otherworldly school populated by vengeful spirits, including talismans to banish the dead, cruel traps to disarm, cabinets to hide in, and a stamina system allowing for limited dashing. Returning features include binaural 3D audio for simulated surround sound and the screen-altering “Darkening” system, plus bonus unlockables. Presented with the original Japanese voiceovers and boasting 11 huge story chapters and 8 supplemental "Extra Chapters," Blood Drivecaps off the Heavenly Host storyline in a big way, providing answers and shocking twists in equal measure.

[Platform: PS VITA; Release: Fall 2015] – Widely regarded by fans as the best entry in the franchise, Earth Defense Force 2is making its way to the western hemisphere for the very first time with this greatly expanded remake. In Earth Defense Force 2: Invaders From Planet Space, players will take the role of one of three distinct military classes and fend off hordes of invading giant insects from a third-person perspective by way of conventional weaponry, armored vehicles, jetpacks, air strikes, trip mines, energy weapons, and more. This definitive version of the game will arrive in North America for the PS Vita with a number of improvements and additions including up to four-player online co-op, an entirely new Air Raider class, and a new English dub.

[Platform: PS4system; Release: Fall2015] – The wild sci-fi action of the Earth Defense Forceseries comes to the PS4 system for the first time in this complete reimagining of Earth Defense Force 2025, now with silky smooth frame rates, beefed-up graphics, and over 50% new content. After selecting from one of four unique playable classes and customizing their weapons, players will lead NPC troops into city-wide battles against hordes of seemingly endless giant bugs, robots, and other colossal enemies. Two players can enjoy local co-op and versus modes, while online co-op supports up to four players to increase the odds against this massive alien threat.

The Legend of Heroes: Trails of Cold Steel

[Platform: PS3 system, PS VITA; Release: Fall 2015] – Revealed for the first time in North America, this RPG adventure from Nihon Falcom’s acclaimed The Legend of Heroesfranchise, known in Japan as Sen no Kiseki, improves on the series’ formula and features an expertly told storyline that both longtime Trails veterans and newcomers alike can enjoy equally. Taking place on the same continent as fan-favorite Trails in the Sky, Trails of Cold Steelis the first game in the series to tread Erebonian soil and explore the inner political conflicts of this oft-mentioned powerhouse in detail. With a standalone story that also delves into the expansive lore that has become synonymous with the series, players take on the role of military students at a time of great turmoil, enjoying school life and bonding with fellow students to earn new abilities in battle, then utilizing those abilities via speedy, tactical turn-based combat with the newly-developed “ARCUS” system. Best of all, this epic storyline can be unraveled either from home or on the go with Cross-Save functionality between the game’s PS Vita and PS3 editions.

NIS America will be publishing the PAL version of The Legend of Heroes: Trails of Cold Steel.

[Platform: PS4 system; Release: Summer 2015] – The latest iteration of the Onechanbara sexy zombie slayer series ups the ante with two sets of buxom vampire sisters and over a dozen stages of high-octane real-time swordplay featuring hordes of zombies—not to mention wildly inventive methods for dispatching these undead opponents. Players will square off against the undead in various worldwide locations, with limbs and blood flying every which way through physical attacks and acrobatic maneuvers alike, occasionally transforming into demons for short bursts of added power and speed at the cost of life energy. Each of the four members of the so-called "bikini zombie squad" has her own unique abilities, and skillful play is rewarded with orbs that can be exchanged for upgraded weapons and outfits. For the first time in the series, players can enjoy the game with full English voice-acting or play through with the original Japanese performances. The game has been rated “M” for Mature by the ESRB with the descriptors Blood and Gore, Intense Violence, Partial Nudity, Strong Language, and Suggestive Themes.

NIS America will be publishing the PAL version of Onechanbara Z2: Chaos.

Return to PopoloCrois: A STORY OF SEASONS Fairytale

[Platform: Nintendo 3DS; Release: Winter 2015] – A new game based on the Japanese PopoloCrois Story comic book series, and a new entry in the wildly successful Bokujo Monogatari farming and life simulation series, now known as STORY OF SEASONS in the West, Return to PopoloCrois: A STORY OF SEASONS Fairytale features both classically-styled turn-based combat and towns full of lively and interesting NPCs who contribute to a heartwarming narrative about friendship, forgiveness and the bounty of the earth that veterans and newcomers alike to either franchise can enjoy equally. Ample farming and life simulation elements are also on offer in this comprehensive crossover, including real-time crop-raising, bug-catching, rock-quarrying, item synthesis, and relationship forging. Players can collect over 600 items and undertake nearly 100 quests throughout the game, supplementing its 25+ hour main story with nearly unlimited potential for replayability. StreetPass features are also present, allowing players to connect with one another and earn bonus items through treasure-hunting.

[Platform: Nintendo 3DS; Release: Summer 2015] – The naughty yet very nice ninja girls of the SENRAN KAGURA universe return to Nintendo 3DS in a fresh, new 2.5D side-scrolling brawler. Featuring the series′ trademark high-flying, clothes-ripping battle mechanics, SENRAN KAGURA 2: Deep Crimson follows the events of SENRAN KAGURABurst, sending all 12 of the original cast members on another supernatural martial arts adventure through modern Japan. For the first time in the series, shinobi can either fight in pairs, covering each other’s backs and combining special techniques as needed, or fight alone to give their partners time to recover after bouts of intense combat. One player can control both team members, switching back and forth at will, or two players can fight side-by-side in co-op mode. The game has been rated “M” for Mature by the ESRB with the descriptors Partial Nudity, Sexual Themes, Strong Language, and Violence.

[Platform: PS4 system, PS VITA; Release: Winter 2015] – A mystical phenomenon transports the buxom beauties of SENRAN KAGURA to a parallel dimension to face off against their rivals in a new kind of battle. In this strange world – which resembles a sunny, sandy island paradise – the girls are thrown for another loop as they encounter departed loved ones and ultimately have to decide if they can bear to part from them a second time. With the biggest roster in the series’ history, SENRAN KAGURA ESTIVAL VERSUSfeatures more moves, more story, more attitude, and more destruction online with matches that can support up to 10 players (PS4 version only; PS Vita supports up to 4 players). All previous shinobi return with a host of upgraded moves to master, and new playable characters offer more challenges to conquer, along with a story that's equal parts sexy and shocking, serious and scandalous, busty and bouncy.

Check out what XSEED came to show off at PAX East!