IK Multimedia, the leader in mobile music creation technology, is pleased to introduce its new Mic Room microphone-modeling app for iPhone, iPad and iPod touch. Designed to complement IK’s full range of analog and digital hardware microphones, Mic Room gives musicians, audio engineers, recording hobbyists and everybody in between the ability to “re-mic” their IK Multimedia microphone to sound and perform like the most coveted microphone models of all time. With classic dynamic, condenser and ribbon microphone models to choose from (plus other unconventional and highly creative models), it offers a treasure chest full of inspiring tone-sculpting tools. 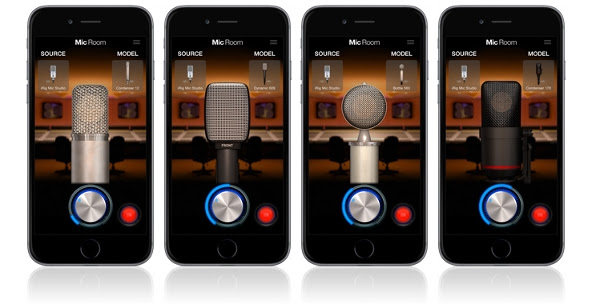 A treasure chest of classic and modern mic tones At its core, Mic Room is all about enhancing the sonic flexibility and versatility of IK’s range of digital and analog microphones. It lets people change the tone of their favorite IK microphones via a comprehensive and expandable collection of virtual mic models that can be applied to impart the style and character of a number of A-list production studio favorites. The full version of Mic Room comes with 8 virtual mic models that cover the complete spectrum of sounds from the classic to the contemporary. This initial library can be expanded via in-app purchase — extra content can be bought a-la-carte or as a bundle. Simply put, this means that IK’s range of microphones now have even more sonic range and flexibility than ever before.

Plug and play Using Mic Room couldn’t be easier. It’s been designed to work seamlessly with IK’s full range of digital and analog microphones for iPhone, iPad and iPod touch (it also works with the built-in mic and Apple headset microphones). That means it fully supports the new iRig Mic Studio as well as iRig Mic HD, iRig Mic Field, iRig Mic, iRig Voice, iRig Mic Cast and the rest of IK’s highly regarded iRig microphone range.
Musicians just need to select their microphone of choice, plug in and then select the virtual mic model they’d like to use. Mic Room will automatically detect the input microphone. Each microphone model can be tweaked to deliver the best sound possible thanks to an intuitive graphic interface that provides an easy-to-read level meter and a touch-and-drag gain knob.
Mic Room is also Audiobus and Inter-App Audio compatible, so it can be effortlessly used with other powerful music creation apps. This unleashes a whole new level of creative possibilities on top of the sonic flexibility imparted by Mic Room itself.

Pricing and availability Mic Room is available now for just $/€7.99. An expandable free version is also available. A native iPad version will be available soon.

Romance Of The Three Kingdoms: The Legend Of Caocao Pre-registration Available