IK Multimedia is pleased to announce that iRig® UA, the first digital effects processor and audio interface that gives guitarists, bass players and other musicians everything they need for rock solid performances, is now available at retailers worldwide and from the IK online store. When used with its companion app AmpliTube® UA, iRig UA provides high-quality sound and zero-latency real-time audio processing for nearly any Android smartphone or tablet (running 4.2 or later, OTG USB mode). This is all thanks to its ingenious design that utilizes an on-board digital signal processor (or DSP) to move all audio processing onto the iRig UA, providing zero-latency performance and a truly superior playing experience. In addition, iRig UA can also be used as a digital recording interface when connected to a Samsung Professional Audio compatible device with Android 5.0. 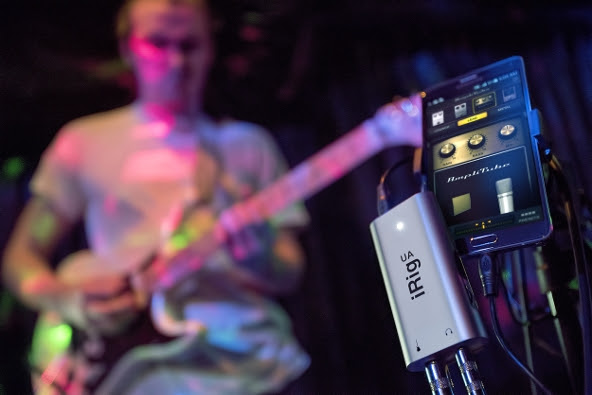 Simply put: iRig UA represents a new stage in the mobile music revolution first started by the initial release of iRig and AmpliTube for iOS in 2010. So now for the first time ever, players can plug their guitar or bass into their Android device and rock with AmpliTube tone anywhere, anytime.

Zero latency
Speed is the name of the game when it comes to iRig UA. It’s been designed to work with AmpliTube UA, a special version of IK’s powerful guitar and bass multi-effects app. iRig UA’s onboard DSP is able to provide consistent zero-latency operation independent of the make or model of the connected smartphone or tablet.

AmpliTube UA: whole lotta gear
That speed comes in handy when playing with AmpliTube UA’s generous and expandable library of meticulously crafted virtual versions of some of the most coveted gear in music history. It comes with 21 pieces of gear right from the get go — no additional purchase necessary. There’s 9 high-quality stomp box effects, 5 amplifiers, 5 matching cabinets and 2 microphones — all the gear needed to get jaw-dropping tone that suits almost every style of music.

Musicians can use these great sounding pieces of gear to create virtual guitar or bass rigs that they can save as presets for easy recall. Each rig is comprised of an amplifier, 3 stompbox effects (two pre-amp and one post-amp in the signal chain) and a cabinet with a microphone.

And while this is more than enough to get started, AmpliTube UA is expandable thanks to an ever-growing selection of purchasable gear from such respected brands as Fender®, Orange®, Ampeg®, Soldano® and more. There’s also gear available from IK’s immensely popular AmpliTube Slash and AmpliTube Jimi Hendrix™ collections.

In other words, the combination of iRig UA and AmpliTube UA offers the plug-and-play performance that mobile musicians with Android devices crave.

Superior sound
In order to provide the best possible playing experience, iRig UA gives musicians everything they need for audiophile-grade sound. Like IK’s other high-end interfaces, it features a 24-bit A/D converter with a 44.1/48kHz sampling rate and a crystal clear low-noise instrument preamp.

This high degree of sonic fidelity comes in handy when iRig UA is plugged into a Samsung Professional Audio compatible device (with Android 5.0). It can be used as a digital audio interface with Samsung Soundcamp, a full-fledged DAW music studio app that lets musicians record and compose while on the go.

Comprehensively connectible
The iRig UA and AmpliTube UA combination is perfect for on-the-go practice and performance. iRig UA features a 1/4” input for a guitar, bass or other line-level instrument, a micro-USB to OTG cable and a 1/8” headphone output with volume control. It also sports a 1/8” AUX input that lets musicians connect any sound source so they can jam along to their favorite tunes with the power of AmpliTube.

Pricing and availability
iRig UA is available now from music and electronics retailers worldwide, and from the IK online store, for only $/€99.99 (excluding taxes). The AmpliTube UA app is also available now as a complementary download from the Google Play store.