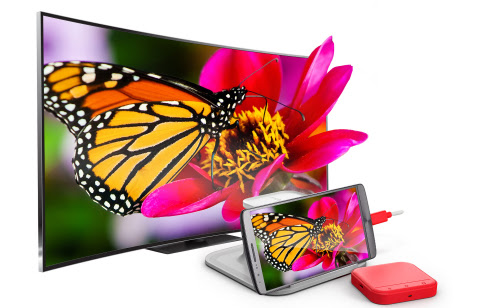 A mobile-enabled dock with remote for Android mobile devices, the NANO CONSOLE allows users to:

*Connect their SlimPort-enabled mobile device to any HDMI-enabled display.
*Control their smartphone or tablet remotely from anywhere in the room with the patented Bluetooth-enabled touchpad NANO Remote;
*Charge their Android mobile device;
*Play and Share their favorite media and apps on a big screen TV, monitor or HDMI projector.
*Connect additional devices such as digital media players, without the need to swap cables, due to the additional HDMI port built in.

Analogix designed the SlimPort NANO CONSOLE to offer a simple, plug-and-play solution for streaming digital media, playing mobile games while connected to large displays, and performing office computing tasks while connected to Bluetooth keyboards and mice, all from an Android mobile device.

The NANO CONSOLE was tested extensively with hundreds of apps from categories such as:

“We are very excited to bring the NANO CONSOLE to the market and pleased by the response we’re getting from our Indiegogo backers,” said Marv Su, Sr. Director of Marketing, Accessories at Analogix. “People already use their smartphones to deliver unlimited content on demand. Whether it is mobile gaming with a Bluetooth enabled Mad Catz controller, or navigating apps with the NANO Remote, or pairing a Bluetooth keyboard and mouse to perform office tasks, the NANO CONSOLE is the bridge that delivers the interface we’re used to on whatever screen happens to be available.”

“We’re excited to team and help support the launch of the Indiegogo campaign for the NANO CONSOLE. Pairing the NANO CONSOLE with Mad Catz’ C.T.R.L. mobile gamepad provides a console quality gameplay experience that’s perfectly suited for today’s multi-platform gamer,” said Darren Richardson, President and Chief Executive Officer of Mad Catz. “Together, they embody our PlayBig! Vision – with the ability to turn your mobile device into a gaming, social and media hub on your HDTV.”

The crowdfunding campaign for SlimPort NANO CONSOLE is live on Indiegogo, at http://igg.me/at/slimportnanoconsole.