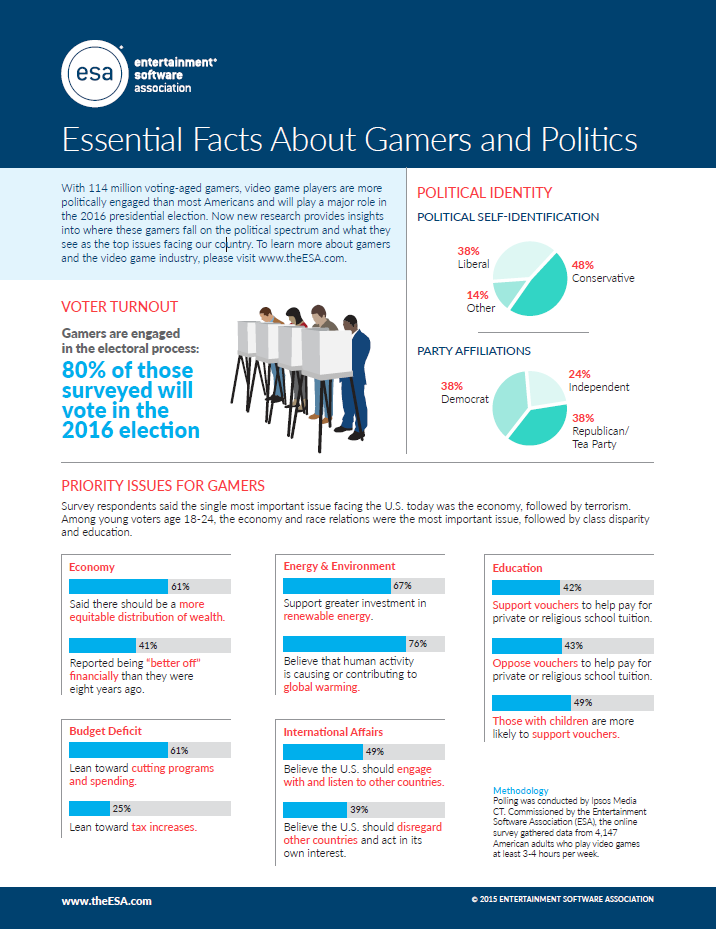 Video game players are more politically engaged than most Americans, and 100 million of them will vote in next year’s presidential election, according to a new survey commissioned by the Entertainment Software Association (ESA).

“100 million gamers will vote next year,” said Michael D. Gallagher, president and CEO of ESA, the trade association that represents the U.S. video game industry. “Gamers are engaged, informed and hold strong opinions on critical issues. From both sides of the aisle, and in every state across the country, they will influence the course of our nation’s future.”

In addition to gamers’ political engagement, the survey explored their political affiliations. Forty-eight percent of gamers identified themselves as conservatives and 38 percent as liberals; among political parties, 38 percent said they align with Democrats, 38 percent with Republicans/Tea Party, and 24 percent label themselves as independents.

“They’re smart, concerned and they vote,” said Michael Steele, former Lt. Governor of Maryland and chairman of the Republican National Committee. “For the first time we get an in-depth look into what gamers think about war and the economy; education and the environment. They say it’s about the game, this ESA survey tells us a lot about the gamers and how they could potentially reshape the political landscape in 2016.”

“What is so striking about this research is how deeply mainstreamed video games have become in our culture,” commented Simon Rosenberg, president and founder of NDN, a liberal think tank. “The views of gamers are as diverse as the nation itself, and there can be little doubt now that playing video games is a near universal activity at the very core now of the national experience in the U.S.”

The gamer voting segment is significant for its size and breadth as well as its engagement on a range of issues. On the most challenging matters confronting the U.S. – including the economy, environment, and national security – game players display strong viewpoints. Overall, they said the most important issue is the economy, followed by terrorism, unemployment, and education. Among young voters (aged 18-24), in particular, the economy and race relations were reported as top issues, followed by class disparity and education. Other notable findings:

67 percent said they support stronger investment in renewable energies such as solar and wind;

41 percent reported being better off financially than they were eight years ago;

61 percent said there should be a more equitable distribution of wealth in the U.S.;

40 percent said the military should be used “as often as is needed to promote U.S. policies,” while another 40% said diplomatic solutions should be the aim of foreign policy.

The study, conducted by Ipsos, surveyed 4,147 video gamer players through an online questionnaire. Respondents were 18 or older and reported playing video games at least three to four hours per week.

This new data closely follows ESA’s recent finding that the U.S. video game industry has a presence in 84 percent of U.S. congressional districts. With more than 1,600 video game development studios and publishing companies operating 1,871 separate video games facilities nationwide. That same report also stated that 406 U.S. colleges and universities offer graduate and undergraduate degrees or professional certificates in video game design and development. This is an increase from 390 in 2014.