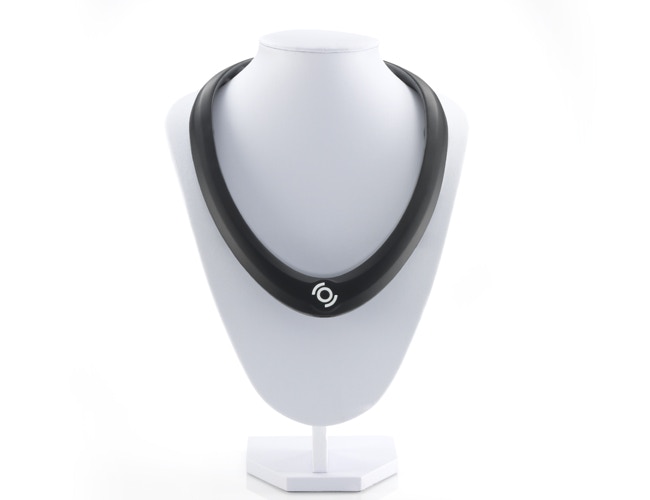 Today, OmniWear Haptics launched the Arc – a wearable haptic device that gives gamers a sixth sense in the game by alerting them of nearby danger. The Arc technology can help users react to other players more quickly, anticipate surprise attacks and become more competitive in some of the biggest multiplayer games around.

Worn low around the neck, the Arc is embedded with tactile actuators that alert you of threats, providing a deeper and more intuitive awareness of the surroundings. By varying the frequency and intensity of the haptic signals, the Arc gives an immediate sense of range and bearing to help people react more quickly to events around them. The device is controlled via Bluetooth by the OmniWear mobile app, which uses machine vision to interpret the user interface of the game on the screen and translate this information into tactile signals perceived by the player. Together, the system provides a second set of eyes watching the game and warning players of incoming threats.

“Modern games require you to keep track of so many things – the radar, the position of your teammates, your health and the actual gameplay,” said OmniWear Haptics founder and CEO Ehren Brav. “With the Arc, you can offload some of this visual information to an untapped sensory channel: your sense of touch. This communicates information in a minimally-invasive way that doesn’t further burden your eyes or ears. Gaming while wearing the Arc is like having a wingman who watches the radar for you and warns you of incoming threats.”

Available for advance purchase today for $150 on Kickstarter  and shipping in the fall of 2017, the Arc and its companion iOS and Android apps support Counter-Strike: Global Offensive and League of Legends. Developers will also be able to add support for their own applications using the Arc SDK, and can directly integrate the device into a game.

OmniWear supporters will receive the lightweight, ergonomic and wireless OmniWear Arc device, a mount to set up the phone on a screen and a USB cable charger, in addition to the apps for Counter-Strike and League of Legends. For gamers, the Arc provides multiple benefits, including:

“Gaming is an industry that demands its players be hyperaware of their surroundings and their competitors,” said Brav. “The gaming environment is a natural place to apply haptics for augmenting situational awareness. We’re continuing to learn about integrating tactile feedback into other applications where situational awareness is paramount, such as industrial safety, sports and vehicle operation. Our vision is to make the sense of touch a primary channel for communicating information.”

Incubated by the Seattle-based Invention Science Fund (ISF), OmniWear Haptics was founded to explore how people can perceive their surroundings through their sense of touch. The concept started when ISF was asked to research new ways to prevent concussions in football. One idea was to provide players a tactile warning in their helmets of impending hits. Although ISF has not yet commercialized this original application, similar thinking led to experiments in a number of different areas.  Very promising results using first-person shooter video game simulations led to the birth of OmniWear Haptics as a company.

“While ISF's technologies have led to several spin-out companies and products,” said Casey Tegreene, head of ISF, “this is our first foray into gaming. And, beyond the multi-billion dollar gaming industry, we see an even bigger opportunity for haptics in markets that rely on clear and quick communication for safety and strategy, such as sports and the military. OmniWear is capitalizing on this potential: an intuitive and effective way to augment situational awareness.”