New Super Mario Brothers U, Bowser Even Likes It

It looks like Nintendo has learned their lessons from past system launches. Systems with Mario games usually do well whereas systems that don't have a Mario game at launch, not so much. New Super Mario Brothers U is one of those "Mario launch games" that helps the system do well out of the gate. What makes NSMBU a game that everyone will enjoy? 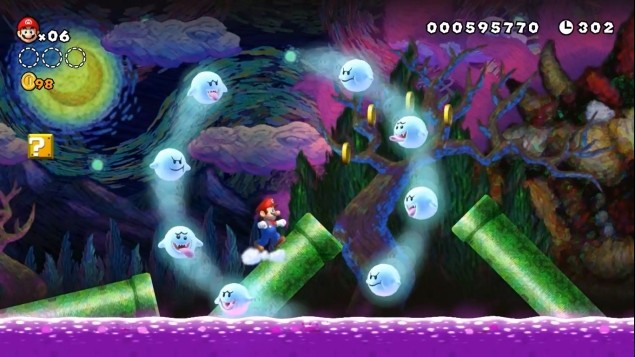 NSMBU has an original story, the princess has been kidnapped. What do you mean that has been done before? Anyway Mario and Luigi team up with two Toads to fight Bowser and save the Princess. Along the way Mario and co will have to fight the run of the mill enemies such as Goombas and Koopa Troopas. The game plays similarly to New Super Mario Brothers Wii with the fact that the control-schemes are basic copies of each other. NSMBU looks like it is inspired by other games in the Mario series and with Nintendo, retro is in these days.

The game pays homage to past Mario adventures and if this isn't your first Mario game, you can tell that right off the bat. At the start of the adventure, the map feels like it's right out of Super Mario World. All the Yoshi's in the game give it that Mario world feel to it as well. The way the map is laid out has "Mario world inspired" written all over it. New Super Mario Brothers Wii had similar retro aspects to it; such has the return of the Ghost House levels. All the levels are food-related and the levels in Super Mario World were food related, such as Vanilla Dome. Combine that with the spin jump and you feel like you're playing Super Mario World.