Scribblenauts Unlimited Spells Success On The Wii U 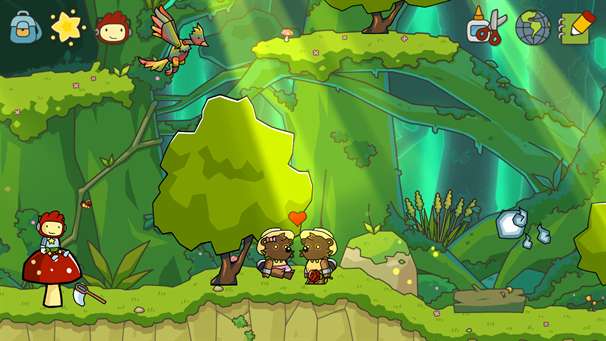 For years, the Scribblenauts franchise has developed into a little niche of its own, providing you an unconventional way of solving problems by letting you create what your heart desires with the help of a magic idea book.  Granted, not all of the ideas always clicked, but most of them were amusing to watch anyway, whether it was generating a Tyrannosaurus Rex out of nowhere or letting a normally non-violent character grab hold of a chainsaw.  Now, after making its run on the mobile market, the series makes its debut on the console front with Scribblenauts Unlimited for the Wii U – and it's a welcome one.

The game focuses on Maxwell, a kid who happens to wield the magical idea book that, when sketched in, can bring objects to life in the real world.  And he'll need it too, as a dire amount of people, both in country and city settings, need his help.  As he runs into folks (whom he can detect with the help of an alternative radar system), he can see what their requests are and help them by creating objects and placing them in their grip.  For instance, a broken down car may require some repair, so you'll conjure up a mechanic to get it fixed and send it along its merry way.

The early puzzles in Scribblenauts are a tad easy at first, but that's just part of the system 5th Cell has put into place to get you comfortable with the game's controls.  You'll watch the main action on the TV screen while using the Wii U GamePad to type up the objects you need, then drag them over to the people that need them with the help of the stylus.  It's a simple system that grows more challenging over the course of the game, as more and more people call upon you for aid.  The more you help, the more stars you earn, and the more of the game you potentially unlock, including new areas and outfits.

Along with main objectives, Scribblenauts Unlimited comes with a bounty of bonus challenges, ones that will really tax your brain when it comes to finding the right object.  Sometimes it's a matter of guessing, putting an object in someone's range and seeing how they react to it.  But it really does bring out your creative side, and it never gets to the point that it's utterly boring – unless you weren't a fan of Scribblenauts games to begin with, obviously.