Ninja Gaiden 3: Razor's Edge Ravages The Wii U In All the Right Ways 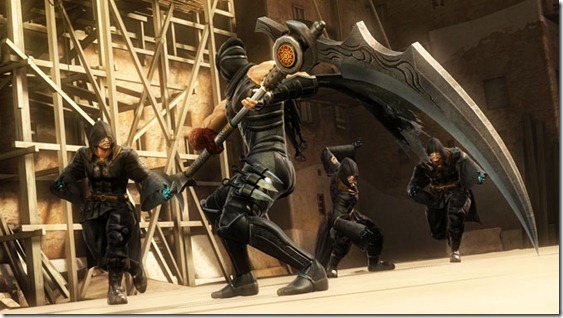 It must be tough to be a ninja.  To come flying off rooftops as if you had invisible wings, only to grab onto the neck of a nearby assailant, snap it within a nanosecond, then come landing perfectly down on your feet, sword drawn, ready to slice enemies to ribbons, even though they're idiotic enough to keep coming at you.

Thus is the daily workload for Ryu Hayabusa, the main hero of the Ninja Gaiden series.  The first two games (along with their Sigma spin-offs) have been a chore for him, as he's battled everyone from demons to weird monstrous creatures to dangerous ninja types, using only his quick skills and his various weapons.  But now he's got his work cut out for him, as Ninja Gaiden 3: Razor's Edge pits him against his greatest foe yet – an alchemist who's infected his arm with a strange demon-like power, one that's sapping him of energy and causing him to go ballistic in places.

Ninja Gaiden 3 originally released on the Xbox 360 and PlayStation 3 earlier this year, under the guise of a reformed Team Ninja, without its main mastermind Tomonobu Itagaki.  It received mostly negative reviews, due to a lack of a coherent story and the traditional blood-spilling action the series was known for, even though it did have some great moments and decent multiplayer.  But with the Wii U version, the team went back and corrected many of their mistakes, and now we get to see the game for the real monster that it is – and boy, is it fun.

This time around, Ryu DOES get to chop up enemies like sashimi, and he'll need every bit of skill that he can muster to do so, as they'll come at him from all sides, launching vicious attacks like suicide bombings and even up-close strikes.  And if they weren't a handful enough, there's also the end bosses, ranging from a nearly invincible attack helicopter to a cyborg T-Rex that rips through everything.  And that's just the early stages.

The gameplay aesthetic is improved in Razor's Edge, with a much better balance in difficulty and controls.  This time around, you don't have to put up with awkward hesitations with slices, you simply just go at it with devastating combos, great block moves, and suave evasions.  They all tie together, though some amateur players may want to start on a lighter difficulty until they get the hang of things.  Later settings will eat players alive, unless you're skilled like a true ninja.