Are You Prepared For The Walking Dead: Assault? 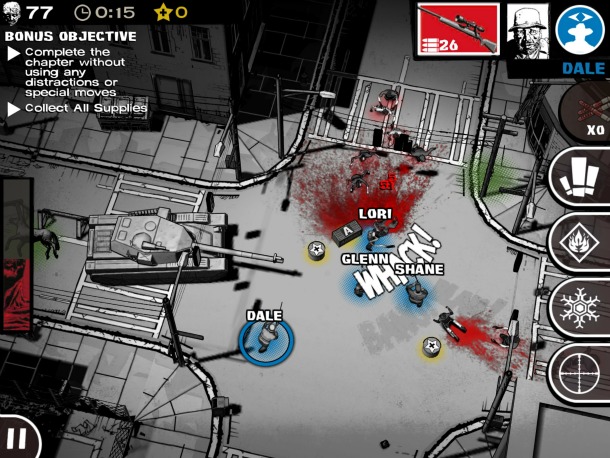 Create your own team of survivors.

The Walking Dead Assault seeks to recreate the world of the comic both from a story and visual standpoint. As soon as the game begins, the player is greeted with the black and white aesthetic that the comic is known for. The graphics are beautiful and are the perfect companion to the original serial. While the game is in black and white, objectives and items are highlighted by color so the player can’t miss them. The game is presented as a top down adventure game allowing the player to have a unique perspective on the world.  Unlike most games, The Walking Dead Assault gives you complete control over the camera. The Walking Dead Assault makes great use of the iPad’s touch screen and allows the player to rotate and focus the game’s camera however they see fit, allowing for a consistent view of the action on screen. While you will never get a close up view of the characters from the series, the walkers and mayhem on screen will create a truly terrifying experience.

Romance Of The Three Kingdoms: The Legend Of Caocao Pre-registration Available