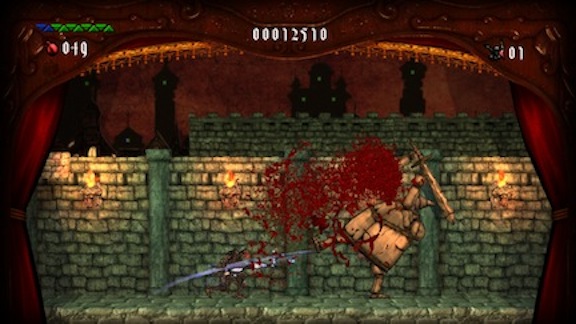 It's hard to describe what Black Knight Sword really is.  To say it's a side-scrolling action game would do it injustice to its diabolically creative, offbeat design, but to call it anything outside of that would be a false description of the game.  I suppose the best way to put it is, "If the designers of Castlevania were ever on a sugar rush through Starbucks holiday drinks, they'd come up with something like Black Knight Sword."

But the game is, in fact, the latest from Digital Reality and Grasshopper Manufacture, the teams behind the successful shooter Sine Mora.  The game puts you in the shoes of a knight as he works his way through a puppeteer-driven world (you never really leave the enclosed stage area, it just moves with you) as you try to defeat an evil princess.

It's hard not to look at Black Knight Sword and not be in awe.  This game has some inventive visual stylings behind it, whether it's the fact you're boosting in the air using springs attached to red horse heads, or battling walking heads that look like they just came out of a Terry Gilliam animation piece.  Even the bosses have something to offer, though their attacks are hardly anything you haven't seen in previous games.