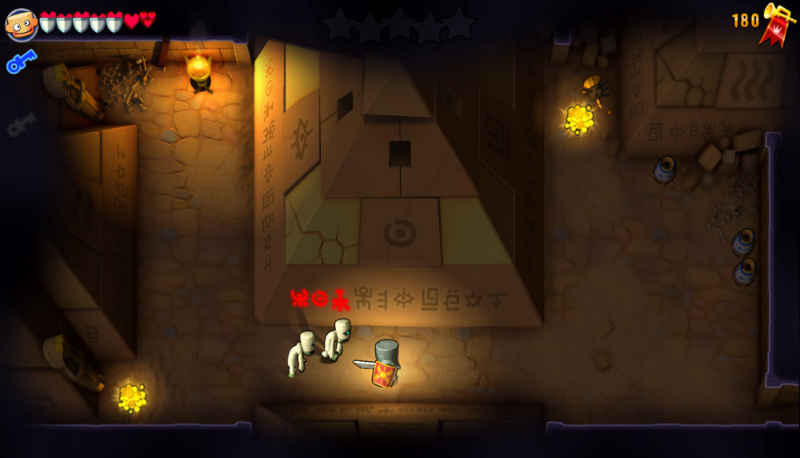 It's hard to believe how many games Creat Studios has managed to pump out for the PlayStation Network in such a small amount of time.  And not just the same old thing either, but diverse games like Smash Cars and Mushroom Wars, one of the system's sleeper real-time strategy hits.  But with its latest, the company really hits its stride, paying tribute to The Legend of Zelda and other quirky dungeon crawlers with the sometimes silly, yet mostly enjoyable, Labyrinth Legends.  If you're looking for a game that will channel your old-school tastes, this could be for you – though you might want to get prepared.

The game doesn't really lay down too much of a story – your bride's been kidnapped by a mysterious foe and you set out after her – but it does set the pace for what's to come.  You'll work your way through five dungeons, all elaborately designed to keep you on the defensive.  Sometimes you'll need to contend with enemies that come your way; other times, you'll need to escort a rather dim-witted character to safety.  And then there are the traps, including the usual assortment of dangers you'd find in a place like this – spinning blades, spiked floors, etc.  Fortunately, you have a dash mechanic, which you can use to your best advantage in order to stay alive.

See, staying alive is utterly important in Labyrinth Legends, because…well, there's no save points.  You either make it through the entire game on one run or start all the way back at the beginning of the dungeon.  To some, this is an excellent condition, one that will truly test your utmost gaming skills.  To others, it's a true setback, mainly because, well, you gathered so much over the course of your quest, only to lose it all and start again.  Even ZombiU was gracious enough to let you track down your former self and restock.

Regardless, the nature of Labyrinth Legends remains moderately fun enough for players to really get into what it has to offer.  While the gameplay is challenging at times (especially with some escort puzzles and bosses that won't go down so easily), it does make us reminisce for the simpler times of dungeon crawling.  The gameplay feels right at home, between dashing, striking with your sword, and a spin attack that can hit multiple enemies.  We also like the looting factor, as it helps you power up your character – provided you can keep him alive, of course.