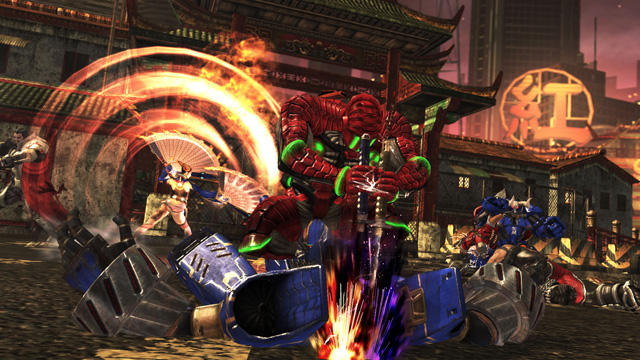 Over the years, Platinum Games has really hit its stride as a game developer, especially when its over-the-top actioner Bayonetta managed to redefine everything we've come to expect in an action game – including nudity stemming from a magic attack.  And this year should be a huge one for them, between the forthcoming Metal Gear Rising Revengeance and the recently announced Bayonetta 2.

But we dare not forget about Madworld.  A few years ago, this game really showed what mature-rated Wii gaming should be all about, whether it was gushing some oversized enemy in half with a chainsaw or slamming a sign post through someone's head.  Platinum Games has just revisited this world with an even more madcap sequel, Anarchy Reigns, which has finally arrived months after its Japanese iteration, Max Anarchy, hit store shelves.

Not much has changed in the world of Jack Cayman, a ruthless bounty hunter with a lot on his mind.  This time, he's taken pursuit of Max, for reasons that are disclosed through the game's single player campaign.  (If you prefer, you can also play as Leo, another guy who's after Max for a different reason.)  Over the course of the game, you'll run through both Free and Main Missions, through markers that are pointed out on a map.  Finishing these not only gets you that much closer to your target, but also unlocks weird new characters for multiplayer, whether it's Bayonetta (yep, she's in this) or some strange dude in a bull suit who can't help but rely on "meaty" puns.

Some of the missions can be fun, requiring you to protect a Bardroid from being beaten by customers or shanghai-ing a helicopter and using its machine gun and missiles to lay waste to guys.  But for the most part, you're relying on your own toughness to get things done, between light and heavy attacks and juiced up super moves that will leave guys gushing, whether you're using electric blades or that lovely chainsaw.