Earth Defense Force 2017 Portable Lives Up To Its Adored Cheesiness 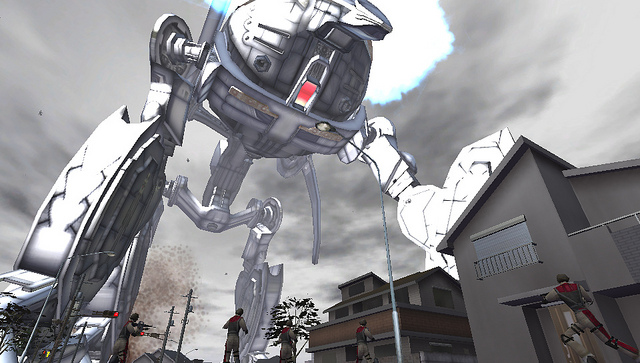 When Earth Defense Force 2017 came out for the Xbox 360 a few years ago, I won't lie – I was hooked.  Between the hideously awful banter between soldiers (including an unnecessary "EDF!  EDF!" chant) and the sheer level of destruction you could dole out, there was just something undeniably fun about the whole thing – like a Godzilla movie, but with soldiers in place of the big monster and everything from giant ants to spaceships coming at you.  It's still a great, mindless game to this day.

And now we can take it anywhere we want with a portable version for the PS Vita.  Earth Defense Force 2017 Portable features a slew of new levels not found in the original (expanding its count to 60) along with abundant new options that let you play online with friends.  We do miss the local two-player side-by-side-on-the-couch split-screen action the 360 version had, but there's no question that this is even better, especially if you have friends looking to save the world in pure cheesy style.

The game pits your team – the Earth Defense Force – against a group of villainous aliens called the Ravagers, who throw everything at you they possibly can, including those large insects, destructive walkers that would give Zords a run for their money face-to-face, and huge drop ships that continuously spew flying ships at you.  Fortunately, your weapons, though not looking like much, can really dish out some imminent destruction.  In fact, most of the buildings throughout the city can be blown apart with one well-timed shot, crumbling to the earth.  (Fortunately, you won't have to pay any sort of repair bill or face a Senator's wrath.  Whew.)

The gameplay is tried-and-true run and gun gameplay, and there's nothing wrong with that.  EDF 2017 feels just as good on the Vita as it did on the 360, and, thankfully, D3 Publisher didn't feel obligated to add unnecessary touch-screen features – the analog controls work just fine here.  And over the course of the game, you can pick up power-ups scattered by downed enemies, pushing your arsenal even further – even if some of the weapons are useless, mainly because they run out of ammunition too damn quickly.

Playable on Ps4 and PS Vita.