Dead Space 3 Lingers On With Excitement and Wonderful Co-Op 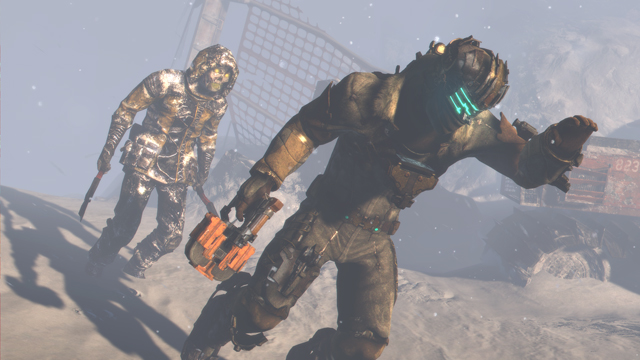 Many feared that EA's latest Dead Space was taking the series in a similar direction as Resident Evil 6, focusing less on the "eek!" style horror that jarred us so well in the first two games and instead taking a more action-based approach.  And in a way, it's sort of true, the series does do away with a bit of tension with better supplies of ammunition and health while you wail away at armies of mutated Necromorphs.  But that shouldn't stop you from checking it out, as Visceral Games is still in its prime with this series.

We won't give away all the plot details, but Clarke has grown weary of his encounters with the Marker.  Unfortunately, he finds himself drawn in yet again when a personal ally is in peril, and he's forced to team up with a newbie named John Carver, a guy who isn't ready to go buddy-buddy with Clarke, but wants some answers on the Marker in his own right.  Their journey will take them back into the recesses of space, where many new dangers await – along with plenty of nasty Necromorphs to go around.

Some people may fear that the ambience and pure creepiness of the original Dead Space have been jettisoned entirely with this sequel, but that isn't the case.  Sure, you have plenty of ammo and health to keep you from collapsing, but that doesn't mean the game doesn't have its share of shocking deaths.  (We learned that the hard way flying too fast into a spinning fan – ouch.)  There are also plenty of "jump" moments, when something comes out of the woodwork to make mincemeat of you, if you don't kill it first.  So, relax, it's still Dead Space, guys.