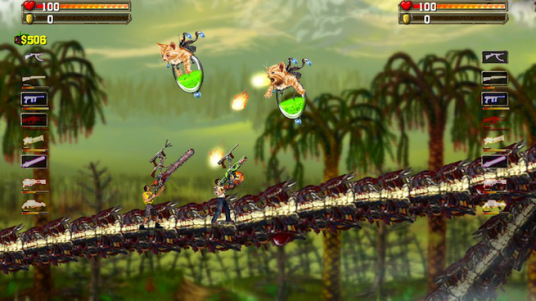 Serious Sam has managed to carve out its own creative (that's the "technical" term) niche in the first-person shooter market over the years, starting with the Croteam-produced original that started it all and leading into several sequels, including the previously released Serious Sam 3, which pushes the graphics to a whole new level while keeping the same level of chaoticness we've come to accept.  But could Serious Sam work on a 2-D side-scrolling front?  We found out with last year's Serious Sam Double D for PC that it could, and with its success, Mommy's Best Games, headed up by Nathan Fouts (you might remember Shoot 1up?), are bringing the madness to Xbox Live Arcade this week.

And, boy, do we mean madness.  Nothing really makes a lick of sense in Serious Sam Double D XXL.  The enemies are comprised of some of the most messed-up creations you can find, whether it's creatures walking around on forks and tooting horns, or winged monkeys with plenty of ammunition, or some of the bigger enemies, such as a combination dragon/peacock creature with rainbow coloring.  Fouts and his team went completely off the tracks with the character design, and though it borderlines on the same level of silliness as, say, The Neverhood's Skullmonkeys (and sometimes even beyond that), it's a welcome change of pace from the usual grunts and zombies.

The rest of the game is pretty much typical Serious Sam design, with multiple routes on each level, locales that are similar to ones you visited in prior 3D releases, and occasional free-running stages.  There's something a bit Xbox Live Indie-ish to it, in terms of how loose everything runs, but the Sam-based charm remains, and that's what counts.

As for the audio, there are plenty of quips and humorous dialogue bits, though not nearly as many as the previous games.  The music's okay, but could've used more of a push during the more intense sequences – though the tempo does pick up when multiple enemies come at you, in traditional Sam fashion.