Major League Baseball 2K13...Haven't We Seen This Before? 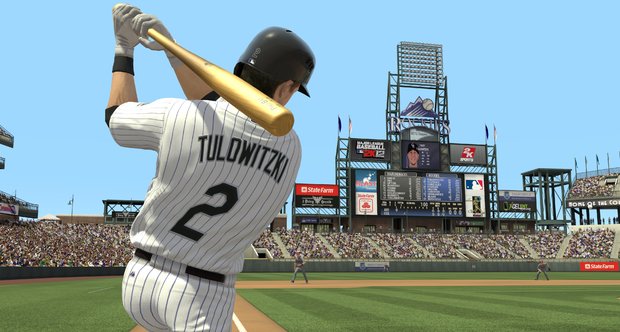 There are particular signs to watch out for that indicate that a company isn't putting 100 percent behind a sports game.  A lack of review copies going out to press outlets; not much in the way of advertising; and, even in the previews, no listing of major changes to the game itself.  That's kind of the way it was with EA's FIFA Soccer 13 for PS Vita, essentially similar to the game that came out with the launch line-up six months earlier; and, sadly, that's the way it is with Major League Baseball 2K13.

Like last year, MLB 2K13 runs by a few of the sport's basics.  That's not to say it isn't a fun game as a result, but you'd think some sort of advancement would be made.  The pitching system remains very refined, as you'll need to execute particular analog rolling functions in order to properly send balls sailing over the plate.  Batting feels golden as well, with a timely difference between contact and power swings, and the ability to bunt if you feel like sacrificing a man for the RBI.  Fielding is also decent, as you can line up a player for a catch with ease – even if they somehow creepily absorb the ball instead of catching it.  I like the analog throwing system too, allowing you to throw with accuracy – or sloppiness – towards a base.

But, really, MLB 2K12 did that.  The only differences I could feel in this version was just a slight bit better timing with both pitching and batting.  And the real question is if I could notice $60 worth of difference.  Nope, not really.

What about the graphics?  Surely 2K Sports bumped up its game in that department, right?  Sadly, no.  The players still look pretty good, though some facial models look like they came off of an America's Most Wanted poster.  The fields look good, like the real thing, though occasionally there's fuzziness and repeated crowd animations, particularly when they chase after a fly ball.  The replay angles are okay, but hardly as realistic as, say, MLB 13: The Show.  With Sony's game, you couldn't tell if it was a TV broadcast or a video game.  Here, it's like night and day.