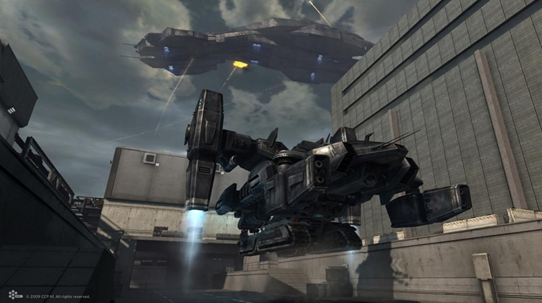 DUST 514 is a free to play massively online FPS produced by CCP Games in their Shanghai studio. The game is only at the Beta stage but can be played on the PSN already. Taking place in the EVE universe and rich of its very large background history, vast star systems and millions of player controlling thousands of corporations and other pirate clans, DUST has a lot to answer for as the expectations of many, could not be higher.

As the games starts, you will have to choose your character specifications, your bloodline and your cast. Each cast has its specialties and history related to the EVE universe and your choices will play an important part in the future of your adventure. The heavy customization system offered will give you the chance to carve your soldier in the exact way you want. Choosing between assault rifles, laser guns, snipers, shotguns or even tanks and buggy will only the first step towards hundreds of possibilities. Each category of weapons has dozens of models and every model a fair amount of specifications you can choose from. And this goes for the weapons, but just as well for the armors, the vehicles, the shields or your personal specifications. Not everything is available from the start as most items will need you to earn experience points to level up your own qualifications.

The gameplay if fairly classic for an online FPS, nothing revolutionary there, but it all works and clicks very smoothly. After a couple of quick battle you will feel at home with the controls, and you will be free to explore the tactical possibilities and get a few kills on your personal stats.  There is about half a dozen maps available so far, from the close encounter oil refinery style, with enemy hiding at every corner to the large hilly valley, where snipers and heavy tanks will take you down very quickly if you are not careful. Most maps are fairly large and you will have to fight hard to hack and control the revival position on the map. Giving up the main revival positions will mean you and your team will reappear in different random spot over the map, losing the tactical advantage of forming an organized army. Those point are normally were the most brutal fights occurs.