Army of Two: The Devil's Cartel Is Fleeting Fun 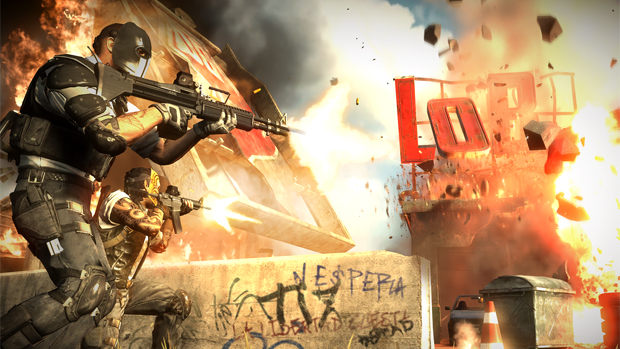 You can just tell when a series has run its course, when a developer runs out of certain ideas and decides to just let loose with whatever action they can get away with.  That's the situation with Army of Two: The Devil's Cartel, the third chapter in the partner-based military action series that tries to keep up where the last sequel, The 40th Day, left off – even though it's under the direction of a different development team.

At least give the producers some credit – they're not just following the usual course in set-up.  This time around, you're knee deep in trouble in Mexico, using new T.W.O. agents Alpha and Bravo to clean up members of a cartel, all while trying to figure out who's running the show.  A fiery heroine named Fiona joins your cause, and Rios and Salem from the original games show up as well, though not in playable form.  No matter – you can still do plenty of damage.

And that's one of Devil's Cartel's biggest aspect – it utilizes Frostbite 2 technology and lets you trash the environment in a number of ways.  Watching bits and pieces of walls and other debris shatter with your bullets is an exciting factor to the game, and causing some major damage with a helicopter turret even more so.  That doesn't stop the team aspects of the game from shining through, however, as you'll still work closely with your partner to draw heat in some situations, like with a shielded enemy, only to have the other guy come around to finish him off.

The game can be played solo, and the behavior of your AI partner in that situation isn't half bad.  However, this game was built for two, so it should seem proper that you bring along a friend in co-op, either locally via split-screen or across Xbox Live/PlayStation Network.  This makes the game more thoroughly enjoyable, especially with the unpredictability of a partner in tow.