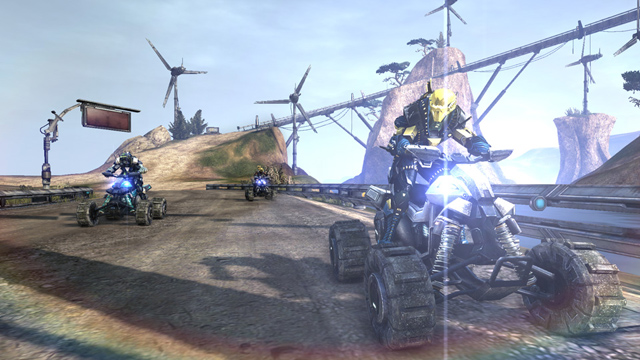 Trion and SyFy had a mounting task ahead of them, to create a universe that intertwined an upcoming television show and video game into one wholly developed product, one that was supposed to evolve with the addition of missions and characters.  But on the eve of the show's premiere, I can't help but wonder if the goal was maybe a little too ambitious for Trion's own good, because Defiance the game, despite a few moments of innovation, just doesn't come together like it should.

That's not to say there isn't an interesting world here, as there is.  You build an Arkhunter, a member of a group of scavengers that fight to keep alive on a futuristic Earth following an alien invasion, and you interact with others in key battles and traveling from mission point to mission point.  There's a lot of territory to cover, which would easily explain why the game requires a 8 GB or so install upon start-up (which can take about an hour or so, including sever updates.)  But the thing is, is it worth exploring?

When you first get into Defiance, you're introduced to the game's controls, as you were with the beta when it launched a while back.  It's routine third person action territory, with a number of abilities available and simple fire-and-move tactics that we've seen in other games before.  Some of the extra abilities aren't bad, like cloaking, but otherwise it's garden variety in terms of accessibility.  That does make the game fairly easy for everyone to get into, including those who are picking it up solely to interact with what's being introduced in the show.