The Ninja Gaiden franchise is one that has always been showered with praise and adulation. Even frustrated players, forced to replay boss battles over and over again still screamed the praises of the title. Ninja Gaiden 3 was attacked by critics, stating that the game focused more on blood and guts than the traditional gameplay of its predecessors. Now, Ninja Gaiden 3 Razor’s Edge follows the Sigma tradition and adds all DLC from Ninja Gaiden 3 as well as other improvements. Is this the game Team Ninja originally envisioned? Find out in our review!

Ninja Gaiden 3: Razor’s Edge looks great. We reviewed the title on the Playstation 3 and the presentation did not disappoint. As Ryu descends upon his victims with beautiful ferocity and dismembers them limb by limb. Blood splatters and squirts from severed parts of Ryu’s enemies and it is tremendous fun. 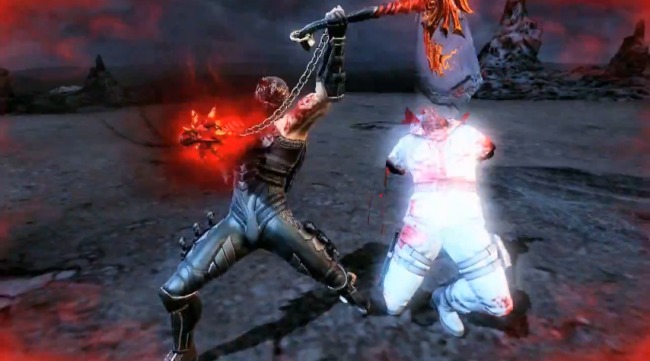 Ryu has a thing about heads. He prefers them detached.

The environments in Ninja Gaiden 3: Razor’s Edge are detailed but lack life or interest. Certain objects such as walls, buses, and cars can be used to vault off of during combat but that is it. There are no destructible elements to be found and this is a real disappointment. With the recent release of Metal Gear Rising Revengence this game pales in comparison. Granted, Ninja Gaiden 3 came first, but Revengence just does everything that Ninja Gaiden 3: Razor’s Edge does, except better. The environments in Revengence were also lifeless, but the destructible elements made the game feel more complete and fun. Unfortunately, the gameplay had us feeling the same.