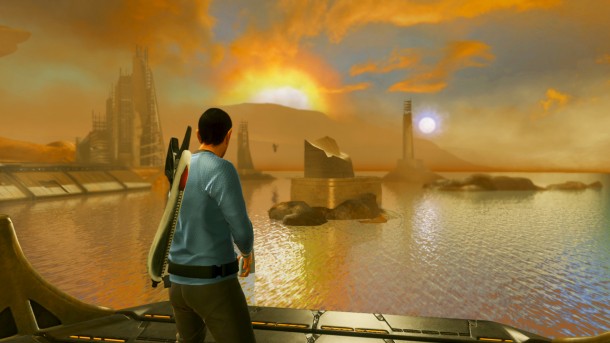 When a publisher announces a game that ties in with a forthcoming movie, it can either go one of two ways.  Either it's a glorious affair that presents a worthwhile experience that matches up to, or surpasses, the film (like, say, Disney's Aladdin on the Sega Genesis or the more recent X-Men Origins: Wolverine) or it's a piece of crud that doesn't even measure up to its source content (like the unfortunate Aliens: Colonial Marines).  Sadly, Star Trek: The Video Game leads more towards the latter, a game that had some interesting ambitions, but failed to live up to them, thanks to cruddy development.

In the game, you guide Captain Kirk and his right-hand Vulcan Spock, as portrayed in the 2009 Star Trek film directed by J.J. Abrams, as they battle the Gorn, an evil race of lizard beings that want nothing more than primitive-style domination over the universe.  Thanks to a horribly guarded Helios device, they just might be able to complete the job, unless these two can save the day.  The fact that only Kirk and Spock have any strength in the game, compared to, say, most of the other able captains who are laid waste to with ease, really doesn't say a lot about the power of Starfleet.  (Case in point when a commander of a star base is all too eager to abandon it in the heat of battle.)

But there are problems abound when the gameplay begins, mostly with bugs.  Star Trek is riddled with them, and it gets to the point of absolute frustration.  During one sequence, we're asked to jump across a gap, where a bridge used to be.  It should be simple enough to leap from one end to the other, right?  Well, the first seven times, we fell to our death.  The eighth, we managed to clear the gap by grabbing the ledge, then, when trying to hoist ourselves up, fell to our death anyway.  After ten minutes, we finally cleared the section, still grating our teeth over the experience.

That's not all.  The Ai behavior is viciously bad in the game.  The Gorn are all too easy to kill, mimicking the same duck and shoot patterns, even if you're approaching them head on.  Others are smarter than that – even more so than our co-op partner.  During our first run-in with a Gorn soldier, we played as Kirk while Spock was played via AI, and he was all too easily defeated within seconds – SECONDS – by one run-over.  And every time we tried to run over to revive him, the Gorn barreled us over, practically forcing us to restart and do it again.