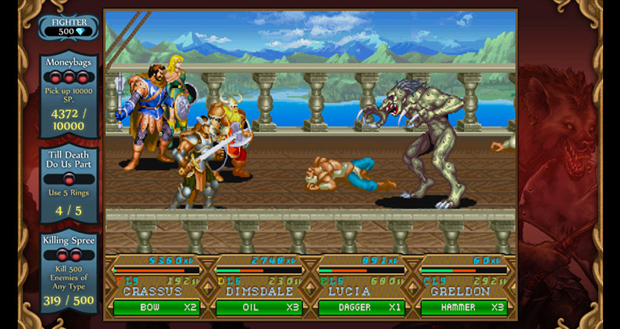 For years, the only way I was able to recreate the magical experience of playing Capcom's Dungeons & Dragons arcade games – which were way deeper than anyone expected from a side-scrolling multiplayer game – was with the import Sega Saturn release, but it was difficult, mainly because it was hard to translate exactly what characters were saying.  I simply had to shrug and accept the fact that everything that I was doing for the greater good.  Still, I couldn't help but feel I was missing out.

Thanks to Capcom, and Iron Galaxy, that's no longer the only option for enjoying Tower of Doom and Shadow Over Mystara.  The new digital release Chronicles of Mystara contains these remastered games, complete with multiplayer options and live Achievement/Trophy tracking on the sidelines – similar to Iron Galaxy's treatment of Darkstalkers Chronicles and Street Fighter III: Online Edition.  They're certainly something to appreciate, especially if you're looking for good, classic coin-op fun to get you through the summer days – or even if you're experiencing the games for the first time.

In either game (doesn't matter where you start), you choose from various characters, each with their own special skills.  Our personal favorite is the Fighter, though the Dwarf and Elf can certainly hold their own.  Try 'em all out, just to see how they feel to you.  From there, you'll embark on your quests, helping out townsfolk and defeating all sorts of goblins, ghouls and, of course, dragons.