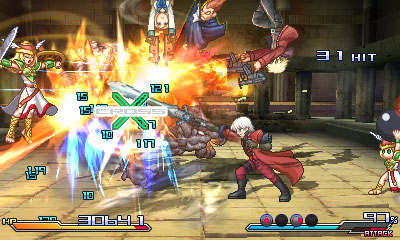 What's more important in a role-playing game – story or character?  That's an interesting question, to say the least.  Some of you would easily state that the story is the way to go, but without any genuine characters to drive it, what's the point?  With Project X Zone, the latest cross-over role-playing/action game from Namco Bandai, the team forgoes telling an enriched story in favor of meshing together a universe of characters from its own world, along with Capcom and Sega's, to create some of the finest cross-over battles you'll find on a 3DS this year.  It's chaotic, yes, and you'll be scratching your head over folks like Ulala and Mega Man arriving out of nowhere, but it's a chaos you'll easily come to embrace.

The story is the weakest part of X Zone, with dark entities popping out of nowhere merely to be menacing (including Lord Raptor from Darkstalkers, teaming up with zombies from House of the Dead).  However, this also enables the developers to introduce several heroes to the fold, allowing players to create dream tag teams that have a surprisingly good effect in battle.  Where else are you going to see Fighting Vipers' Bahn dish out justice with Street Fighter's Chun Li and Darkstalkers' voluptuous Morrigan?  Only in X Zone.

This game plays similarly to Fire Emblem Awakening, to an extent.  You guide players in a grid-like system, facing off against enemies, breaking objects that might get in your way, and picking up items scattered throughout.  However, if you're within reach of an enemy, you can launch a super-sized attack.  The game shifts to a side view, where you execute actions depending on what's available for each character.  There are a variety of moves you can pull off, using the analog stick and certain button presses, and they're fun to watch, with multiple hits leaving an enemy devastated.