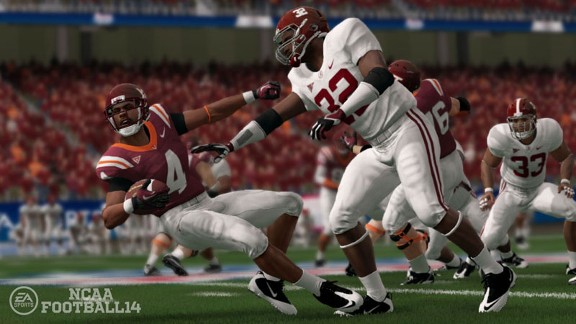 I admit, I'm not as much of a fan of college football as I am pro football, but if someone invited me to go to a CSU Rams game – especially a night one where the crowd can be rowdy – I'm all in.  There's something about the collegiate atmosphere of the sport that the NFL wishes it could capture, and when there's a decent contest on TV, it keeps me drawn in enough.  Even if I don't care for whatever the Big 12 teams are anymore.

For those who are avid college football fans, EA Sports has you covered once more with NCAA Football 14.  This latest edition to the franchise has a few vital changes that are sure to get attention from long-time players, but, for the most part, it remains unchanged.  Passing and running downfield still feels as natural as it's ever been; and guiding your team to a championship in the Road To Glory is still a lot of fun, especially if they're a squad that hasn't won in a few years' time.  Everyone likes an underdog story.

Still, as great as it plays, and as worthwhile as some of these changes are, I couldn't help but feel there's a genuine lack of innovation this time around – like a runner who continues to make the score, but doesn't have the same spring in his step.  Maybe it's time for EA Sports to bump up its game, especially with next-gen fast approaching.

Gameplay clicks as it always has.  Setting up pass plays is still very cool, though, honestly, it comes down to the efficiency of your passer and receivers.  If they suck, well, prepare for a lot of fumbled balls.  The running game is razor sharp, as you can brush off or juke past defenders making a sprint for the goal line.  And with the new Madden engine implemented into the game, it comes across more realistic than ever when it comes to tackling.