Where's My Mickey Is A Splash

Along with the Endless Runner, the “where’s my water” genre is becoming more and more popular on mobile platforms. The genre may still be relatively new for some gamers, but this puzzle hybrid is growing in popularity with every download. The genre asks players to create clear paths for water by altering the environment so it can reach a specific destination. While clearing the path, players have to avoid obstacles in order to reach their goal. Disney has cashed in on this genre before with Where’s My Perry? But now Disney is bringing out it’s franchise player in Where’s My Mickey?. Can the star power of Mickey bring this genre to prominence? Is it worth the download? Find out in our review!

Mickey is the new addition to the Where's My Water family.

Each level of Where’s My Mickey? is presented as a separate cartoon chronicling Mickey’s need for water based on the situation. Currently the game features “When Life Gives You Lemons”, “Fanning the Flames”, “Growing Pains”, and “It’s A Big World After All”. Each level tells a story of Mickey struggling to solve a situation where water is the only answer. From running a lemonade stand to attempting to dowse a renegade flame before it reaches a pile of explosives, each level is different and unique. The gameplay also changes with each level. While “Fanning the Flames” introduces lava to the gameplay, “Growing Pains” actually allows you to alter the environment in an attempt to cover the holes that Pluto has dug in the back yard. The gameplay is great and every level is unique which adds to the replay value of the game. 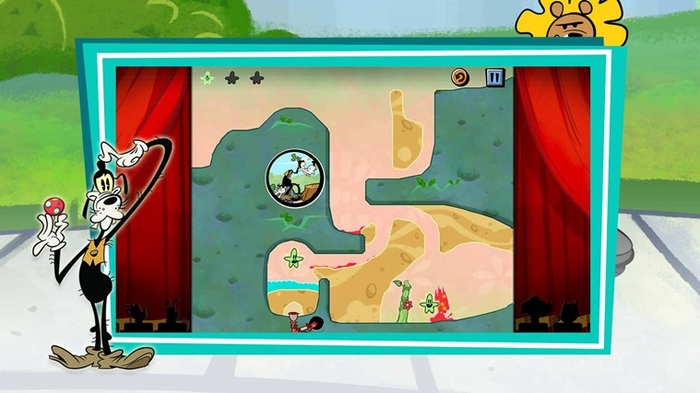