The summer of movie tie-ins continues on GamerHub TV. Before you let out a frustrating grown caused by the disappointment of past movie tie-ins and skip to the next story, think about this. This movie tie-in is based on a comic book. This movie tie in involves cops, monsters, and a cowboy. Still not interested? The game features two person co-op play where you battle waves upon waves of demons. Still not interested? The game also features a diverse selection of weapons and environments to battle these monster and demons. The game also features Ryan Reynolds, who has never delivered a poor performance in a comic book (except every comic movie he has ever done). We are talking about R.I.P.D.: The Game and don’t worry, it is not as bad as the movie. It is worse. 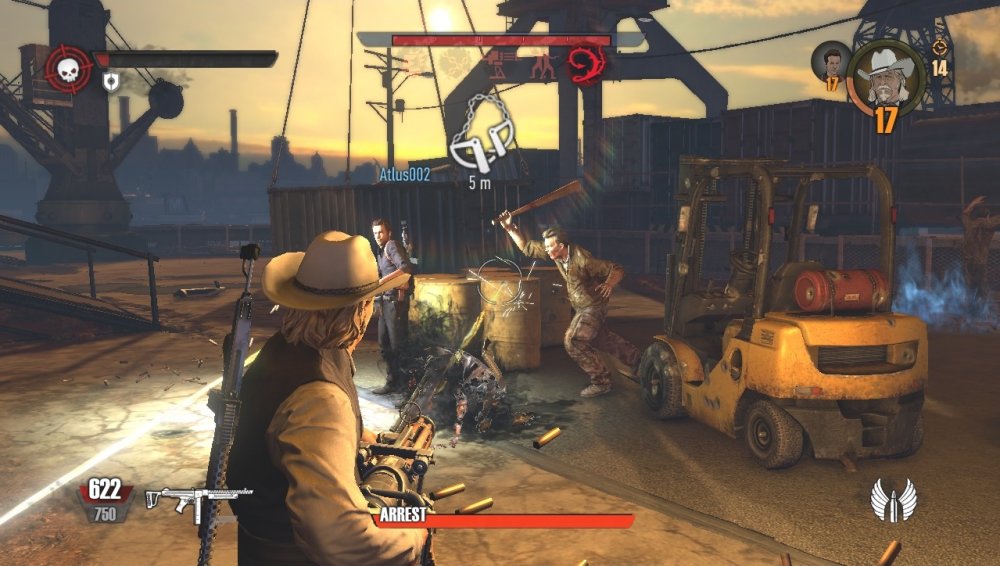 R.I.P.D.: The Game follows the storyline of the movie. You can choose to play as detective Nick Walker or lawman Roy Pulsipher as they attempt to rid the world of deados. Deados are souls who have seeped through the cracks of judgment and remained on earth. The longer they stay on earth, the more disfigured and monstrous they become. Ryan Reynolds and Jeff Bridges lend their likenesses, but not their voices, to the game. While the premise sounds just ridiculous enough to work for a video game, the embarrassing presentation and gameplay make this a game that everyone should avoid like death himself.

The presentation of R.I.P.D.: The Game is a generation behind. The main characters do resemble their movie counterparts, but that is where the compliments stop. Most of the environments that you enter are dull and uninteresting. There is one roof top map that is the exception, but its not enough to elevate the maps overall. Every environment is boring and I literally begin to nod off while playing the game. The maps are also very small and I felt suffocated while playing. The atrocious gameplay only makes this game worse. R.I.P.D.: The Game is a third person shooter with an over the shoulder focus. The aiming mechanic is non-existent, as it does not work. There is also no ability to cover in the game so you must resort to running and gunning. The monsters in the game are even more generic and uninteresting than the film. The game asks you to place bets before the game begins to create competition with your partner. This is a great idea and the mechanic actually performs well. The gameplay is just too bad to enjoy it. There will be a few people that gain enjoyment from playing R.I.P.D.: The Game, but the game will quickly wear out its welcome after the first never-ending match.