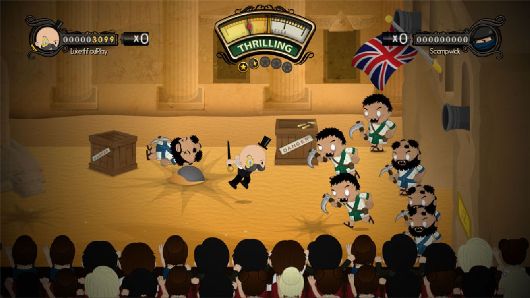 Nothing beats a good show. And that's exactly what demon hunter-turned-actor Baron Dashforth does with Foul Play, a game that comes out of left field and qualifies itself as one of Xbox Live Arcade's better brawlers. That's not an easy thing to do, considering that the territory has already been dominated by the original Teenage Mutant Ninja Turtles arcade game and The Behemoth's glorious Castle Crashers. Yet, with a great concept, smooth combat and plenty of captivating moments, this one easily muscles its way into the act.

Dashforth is a man who's got many adventures to talk about, but instead of just sitting there and briefing the audience, he prefers to act them out in an elaborate stage show. So he moves about, with the help of his chimney sweep pal Scampwick, beating up "thugs" (actors, but they act the part, you see) and eventually clearing his way through each chapter. As he goes along, a new part of the story opens, and eventually tells more of the truth about the man's father – also a demon hunter, who disappeared under mysterious circumstances.

Where most brawlers would stick with gameplay tactics where things get repeated over and over, Foul Play innovates a little bit with the ability to mix up combos. Sure, you'll run into repetition, but there's something stylish about the way Baron knocks enemies into the air and keeping pummeling away at them, or how Scampwick can chain together moves with him, via co-op, to turn a thug beating into a competitive contest. There's really something to the gameplay that sticks with you here.

Let's see what the folks at Vertex Pop have up their sleeves!

Hands On With Roarr! The Adventures Of Rampage Rex-Pax East 2018

Can you have a dynasty in this day and age?