Balance Of The Force Brings Greatness To Star Wars Pinball 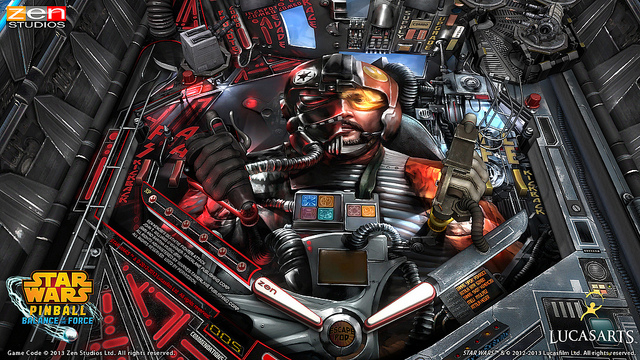 Ever since its release earlier this year, Star Wars Pinball has dominated the genre handily. How couldn't it? With impeccable design that eschews straight from the films and legacy, and superb gameplay additions that will keep you competitively flipping, it's the kind of thing that demands expansion, just to see what's next.

Today – or tomorrow, depending on your platform – Zen Studios will do just that with Balance of the Force. This new add-on features three all-new tables based on bits and pieces of the Star Wars universe. You've got a table dedicated to the villainy of Darth Vader; one based upon the third film in the original trilogy, Return of the Jedi; and a third that's entirely original, allowing you to play as either Rebel or Imperial pilots in Starfighter Assault.

Out of all three, Return of the Jedi feels the weakest to me – but it's still a very good table. You'll find a number of bonus rounds here that'll keep you coming back, including a romp-filled speeder bike chase that has a good twist at each forthcoming turn. That said, it's too easy to lose your ball in the outlanes, and the kickback feature doesn't last long enough. This might be the hardest one to get a high score on – though that won't stop you from trying.

Playable on Ps4 and PS Vita.