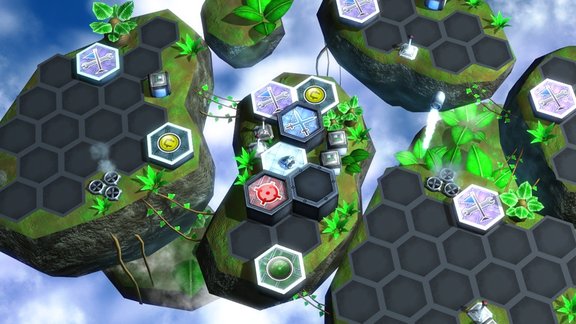 Namco Bandai should know how to put together a good shooter. After all, this is a company that laid down the foundation for some of arcade's greatest ones, including Xevious, Galaxian and the infamous Galaga. Maybe that's what motivated the company to give Brain Slap Studio's Hexodius a try, with a twin-stick concept and an "open up levels as you go" concept that would maybe remind gamers of those glorious heydays. Unfortunately, though, its basic design does anything but.

In the game, you're working alongside a robot companion to escape a trouble-filled world, opening up new levels with each one you complete and essentially getting to the "big boss" that's holding you back. The problem is getting there. See, each level is based around a small grid area, with not much diversity in design between each one. Even if level design was ramped up, though, you're still just shooting waves of enemies, or defending some helpless robot, or hauling important energy drums back to a starting point.

Considering Brain Slap Studios is just a three-man team, some of the work can be appreciated. The "drag item" stages are particularly innovative, just because they're loaded with dangers at every turn. Unfortunately, they lack balance, and the end result means that only the savviest of pilots will get through. If only the design was leveled out a bit with "average" and "high" difficulty options…

The general shooting stages don't fare much better. There are different enemy types, and you can pick up power-ups that become a bit more interesting as you go along, but the gameplay never really escalates like it should. You're still just dragging around and shooting small waves of enemies that come out of each of the doors, with very little reward for doing so. Sure, you can power up your ship, but just to do the same thing over and over. There are brief moments of inspiration – a mini-game resembling Space Invaders in a much smaller, more dangerous space – but they're fleeting.

Retro is the hip thing right now. Does the Res Plus follow suit?