Call Of Duty: Ghosts Serves Up Another Hollywood Thrill Ride 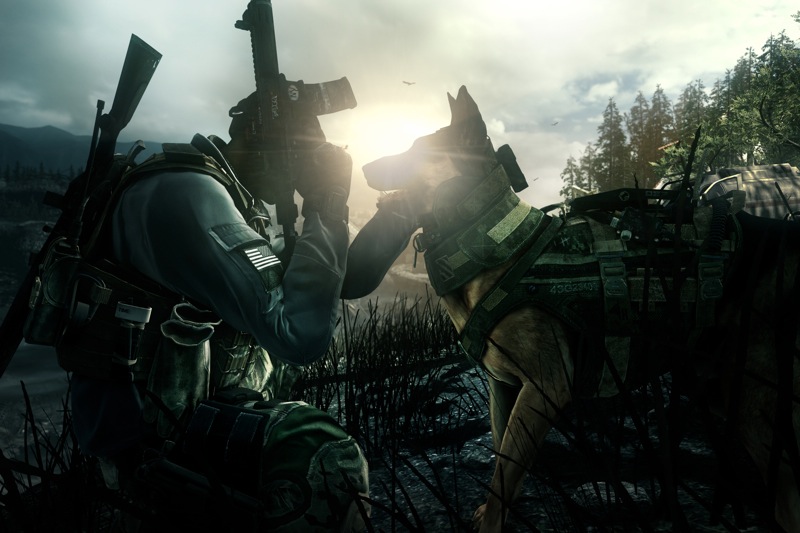 Infinity Ward is back in action with a brand new take on Call of Duty. This launch of a new franchise for Activision turns the tables, to a degree, and finds players outmanned and outgunned as they try to stop the South American “Federation” from taking over the entire world. The campaign mode serves up about six hours of gameplay, and features the types of epic set pieces that have defined Call of Duty, as well as plenty of new innovations that will keep players entertained.

The story opens up with the Federation taking control of an American space station and a Star Wars defense system called ODIN (Orbital Defense Initiative). From the get-go this gives players a taste of zero gravity gameplay – something that will come into full play at the end of the game. Fans of the James Bond Moonraker game and the recent blockbuster Gravity will enjoy these sequences, as they do offer a fresh landscape for the shooter genre. The same can be said of Ghosts’ underwater sequences, which were teased back at E3 and truly deliver a white-knuckle experience – complete with sharks that are even deadlier than enemy gunfire.

The action actually jumps a decade from the takeover of the space weapon, which does fire missiles down to Earth, and the main quest. Over those 10 years, America has been fighting back and preparing to take it to the enemy. The landscape this war is being fought on is complete destruction. California is literally devastated with huge sinkholes and crumbling buildings. One thing the Call of Duty games have done two years in a row now is destroy The Golden State.

Players step into the role of Logan Walker in the game. He spends much of the game with his brother, David “Hesh” Walker (played by Brandon Routh), and works for his father, Elias Walker (played by Stephen Lang), a key leader in America’s fight against the Federation. Along the way, the player will team up with the infamous “Ghosts,” elite soldiers who can infiltrate enemy bases and wipe out huge numbers of bad guys. These super soldiers are also equipped with the latest technology and gadgets (I loved the remote controlled sniper rifle) to help them with each mission. 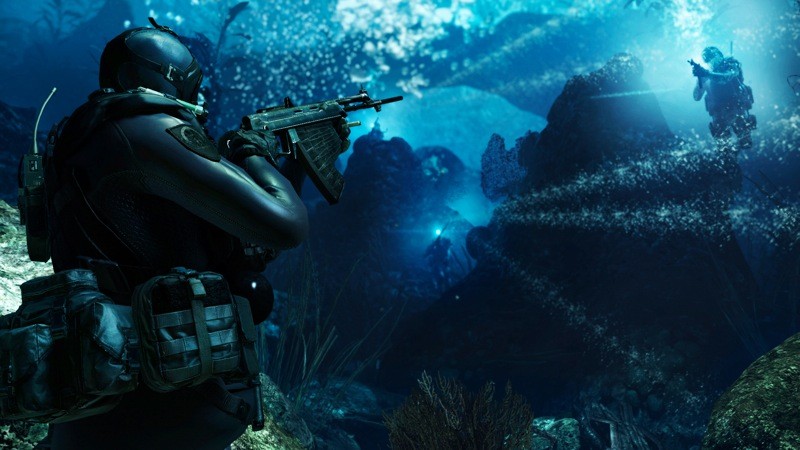 A central character in this campaign story is Riley, the first dog featured in a COD game. The German Shepherd (which is also playable in multiplayer) is a key part of several levels. Players “sync up” with Riley and control him through high grass to gain recon on enemies. He can also be used to attack and kill soldiers. Being a dog lover and owning a black German Shepherd (named Friday), I found this dog to be a welcome addition to the game, especially in the PlayStation 4 version where the visual fidelity of the dog and its fur really stood out.

The story, which was co-written by Oscar-winning director Stephen Gaghan, sends players to hot spots around the world. This opens up a lot of different gameplay styles. In addition to the boots-on-the-ground shooter action, Infinity Ward serves up helicopter action as players pilot attack choppers around oil rigs in the ocean. There are also two sequences that find players commanding fast-moving tanks through enemy bases in the desert. And a wild armored truck ride through iced over waterways. I enjoyed these vehicle battles, which offered a nice change-up to the shooter action. The aforementioned underwater and outer space battles also offered something fresh. Even on the ground, the number of different locales and obstacles that the game throws at you keeps things interesting, and always entertaining.

Ghosts is like a non-stop Hollywood thrill ride that you can play through in one sitting. It even serves up a solid villain in Gabriel Rorke, a former Ghost who’s out to hunt down his comrades. He’s not as complex a character as Treyarch and David S. Goyer served up in Call of Duty: Black Ops II, but he is memorable. And (spoiler alert) he will be back for more in the sequel.

The success that Call of Duty has had over the past decade can be attributed to the multiplayer experience. Infinity Ward introduces plenty of new gameplay in this department. In addition to playing as a dog, the developer has added female soldiers to the mix for the first time as part of an enhanced loadout and customization dynamic. Squads mode allows newbies to take on AI enemies before venturing into the battlefield against real players. There are 14 diverse maps of varying sizes. New interactivity within these dynamic maps changes the gameplay experience, like when a satellite system adds even more destruction to a bombed-out baseball stadium. 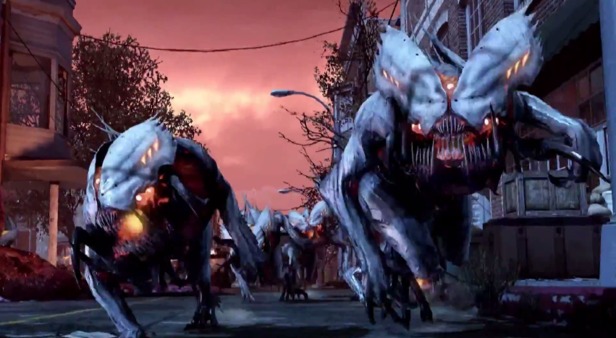 Extinction is a new four-player co-op mode that sends squads through a series of challenging alien encounters. There are five different types of alien creatures to contend with. And while that number may seem small, they come in huge hordes and they’re very lethal. Playing together as a team is vital to progress through this multiplayer campaign. There are four class types for players to choose from, each with unique abilities that come into play on the map. The objective is always to destroy the hive, but waves of challenging aliens makes this easier said than done. The ability to earn money and spend it on weapons big (like a chopper) and small (like ammo) keeps things interesting throughout the experience. This mode was fun to go back and play again to find all the different hidden weapons that Neversoft has included.

Call of Duty has become a brand that offers fans exactly what they’re looking for. With multiple studios working on new games that alternate release every other year, there’s plenty of time, and talent, to bring a slightly bigger, slighter better experience to gamers. Ghosts works across campaign, co-op and multiplayer by fine-tuning each experience with just enough to keep things fresh. Activision isn’t re-inventing the shooter with each new game, but they are delivering a quality gameplay experience that’s well worth the price of admission.

It’s worth noting that the next gen version of Ghosts really stands out. I played the PS3 and PS4 versions of the game and the level of detail in the world and the characters really showed off the potential of next gen gaming. For those who are upgrading to the new consoles, it’s worth the extra $10 to get the next gen version. It’s the same game, but a different experience on next gen.