The adventures of Rigby and Mordecai on the hit Cartoon Network show Regular Show are timeless, namely because the duo knows how to have a good time without resorting to false emotion, or situations involving second-rate humor – the kind that plagues most sitcoms these days. This animated show has a flair to it, one that fans of all ages can easily get into. It doesn't hurt that their friends are goofballs in their own right as well.

Since the show's a hit, it was only a matter of time before the duo got their own video game, Regular Show: Mordecai and Rigby In 8-Bit Land. This throwback to platformers from the good ol' 8 and 16-bit days comes to us from WayForward, a developer that was already riding high on classic gaming this season with Capcom's DuckTales Remastered. This game comes up second to that stellar effort, but by no means is it a mess.

The plot's pretty basic, as it doesn't even base itself on an episode of the show. The pair finds themselves trapped in a classic video game, and must use their skills to get out. While the story could've had more involvement with characters and situations from the show (like the unicorns – "Bros, bros, bros!"), it's quite pleasing on its own.

With Mordecai, you'll be able to double jump and use flying fists to defeat enemies from a distance, along with bopping on their heads. Rigby, a smaller character, can fit through tiny areas and also bop on heads for offense. The game isn't just strictly side-scrolling either – it changes into top-down Addams Family: Fester's Quest style top-down action, as well as side-scrolling shooting stages ala Gradius. 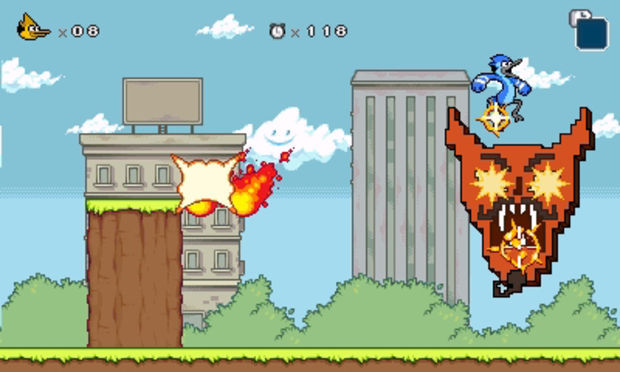 Each stage comes with a boss encounter that's textbook platforming, with a pattern to figure out to eventually defeat them. It's this kind of old-school design that makes 8-Bit Land a more appealing effort than other games based on TV shows, even if the theme is minimally used here for placeholder fare.

Case in point – with DuckTales, WayForward went all out with voice acting, quality Disney animation, and even adding a few new wrinkles to the license. With Regular Show, we don't have animated scenes from the show (which would've ruled in 3D), no verbal communication between the characters, and barely any appearances from their friends. It's almost like WayForward was in too much of a hurry to get it done – or the cash just wasn't on hand to go the extra mile.

No matter. The game controls very well, like old platformers, with pinpoint precision. Sometimes you'll accidentally fall off a ledge or swear you hit that snail you were jumping on, but these mistakes are minimal at best. Being able to switch between the two characters is great as well, as you can solve puzzles, collect cassette tapes and earn precious one-ups to keep your adventure going.

On top of that, you can unlock cool mini-games, such as Smash TV-style overhead stages and more shooting action, if you're a fan of that genre. The coin mini-game is also fun, though you're likely to figure out where to place what coins after placing them the first time around. No matter – bonuses are bonuses, man.

Though it's easily beaten in an afternoon, 8-Bit Land is still a fun little platformer that fans and kids should check out. These two may not have a leg up on Mario, but they certainly know how to fit in the genre. Unlike some mascots that will go unmentioned. You know who you are, Chester Cheetah.