Injustice: Gods Among Us Brings Superhero Mayhem To PS Vita

When Injustice: Gods Among Us made its debut earlier this year on consoles, it showed that Netherrealm Studios could do more than churn out Mortal Kombat sequels – while at the same time justifying the DC Comics legacy in its own right. It's a fun, unpredictable fighting game, one with a story that, well, is quite admirable considering it's a fighting game.

Now that same experience has come to the PS Vita with the Ultimate Edition, complete with a number of new S.T.A.R. Lab missions and six additional characters originally released as downloadable content, including Lobo, Zatanna, General Zod and…Scorpion from Mortal Kombat? Oh, come on, you knew there had to be a crossover somewhere. Remember Mortal Kombat vs. DC Universe?

Anyway, the story deals around alternate universes, and to go into detail would give away some sweet plot points, including a scary revelation with Superman. Let's just say that if you're a comic book fan, you'll love where it takes you – even if that means putting up with characters you normally wouldn't fight as. (C'mon, Cyborg is a badass.)

After finishing the story mode, you can jump into regular fights, which I humbly suggest if you want to check out the awesome new characters. Lobo is superb in his own right, and Zatanna really adds something, dare I say, magical to the proceedings. But it's perhaps Zod that really gives the adjusted roster some weight, especially with what occurred in the Man of Steel film earlier this year.

Anyway, the fighting itself remains excellent. You can use a number of moves to keep things interesting in a fight, such as special attacks, a "wager" system where an epic clash can fill up your super meter in a hurry, and even throwing around items in the environment. The "super moves" are incredible, launching into a breathtaking cinematic where all sorts of crazy stuff happens, like Harley Quinn dropping off a bomb on her opponent with flair, or Batman running over someone with a programmed Batmobile. Oh, and Aquaman totally sics a shark on you.

As for the game's conversion to Vita, it's a bit up and down. On the up side, the controls are superb. The game handles very well with all the moves in your arsenal, and the action doesn't slow down a bit as a result. The multiplayer can be a little iffy depending on your connection, but the single player stuff holds up well enough that execution won't be a problem. The S.T.A.R. Lab missions are very cool as well, though they don't make use of the Vita's capabilities often enough. This may be a good thing, especially to those who tire of the system's touch-screen antics.

Where the game comes crashing down, however, is with its presentation. The audio is good for the most part, with at-the-ready voice actors filling their roles with ease and a decent music score. However, Armature Studios, who did so well on Batman: Arkham Origins Blackgate last month, kind of blew it with the graphics.

Don't get me wrong. The fighting action looks good when it's happening, and the frame rate is solid. However, the cinemas look terrible by comparison, like they were compressed into DivX form. They don't match up with what's happening on-screen. Worse yet, some of the player models look a little weak. Joker looks like his usual old jolly self, while Cyborg…needed a bit more work. These visual issues could've easily been tidied over with some more post-development detailing. 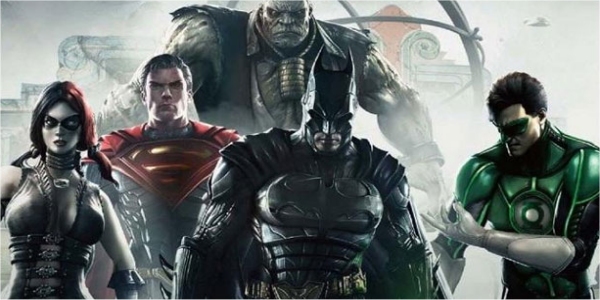 Despite visual hiccups, Injustice: Gods Among Us Ultimate Edition is a suitable fighter to take with you on the go. It's not as polished as it could've been, but it handles well and brings more than enough chaotic fighting action to keep you busy on that bus trip. Sometimes, that's the only type of hero people need.