Astro Gaming's Battlefield A50 Headset Is Expensive, But Worth It 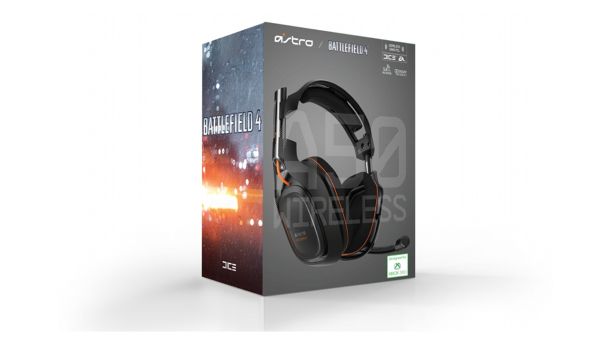 When it comes to peripherals, you get what you pay for. If you invest in a $20 controller, chances are you won't get the same performance that you would out of a $60 one. Likewise, if you buy a $20 headset, you'll get the minimum number of features out of it than you would paying for a more top-of-the-line model from Turtle Beach.

Astro Gaming's A50 headset, which originally went on sale last year, conveniently put more of the tech into the head piece itself, rather than the mixamp that originally came with the A40, to make it more convenient to use. You still have supplementary parts that come with it – namely a stand that holds your headset and the secondary receiver that plugs into your system – but there's no question it was an improvement for the better.

The company recently released a model in conjunction with Battlefield 4, EA and DICE's new first-person shooter, and while not much has changed technically about the headset, there's still no question it's one of the better headsets you can buy right now, if not the best.

Set-up for the A50's couldn't be simpler. You take it out of the box, set up the receiver (and any extra wiring if you're going to PS3 – the 360 hook-up is a little more convenient), put the stand together with a simple "SNAP", and get your chat cable for the 360 if you're using that system. From there, you'll use the built-in buttons on the headphone speakers to control your settings, such as volume and chat/in-game volume, which you can balance or tone down if you wish to talk to your friends.

For those used to the mixamp feature on the A40's, this may feel like a bit of a shake-up that takes getting used to. However, I found the headset to be very convenient with these features, as you didn't have to reach down to a secondary unit to make adjustments in the heat of battle. The only downside, though, is you can't use those awesome speaker tags that worked so well with the A40's, since the tech took out the ability to use magnets to hold them in place. There's still Battlefield 4 text on the headset, though, which beats nothing.

As for the audio performance levels, they're outstanding. No matter which of the in-game settings you're using for audio style, you'll find a booming 7.1 surround sound set-up that really engulfs you in the game. It can be a little loud with up-close effects, but nothing that will get in the way of your general performance. Nothing quite sounds as good as this, though Sony's Pulse wireless headset certainly comes close.

Comfort is an important factor with Astro Gaming's headsets, and the A50's continue to be the best of the bunch. These are quite nice fitting around your skull, and won't really wear down over time, though you are likely to form a little sweat around the ears during prolonged sessions. It never hurts to take a break, wipe off any of that residue (so they won't get grody or something like that), then continue on.

The only real negative to this headset is the price. $299 may be a lot to ask – especially considering it's not 100 percent compatible with some next-gen hardware – but you certainly get your money's worth if you want sound quality, or a surefire way to talk with your friends without the audio cutting out.

Bottom line, the Astro Gaming A50's are the way to go if you want a premiere headset that holds up well in terms of performance and quality. It didn't fail on me once, not even during the most heated Call of Duty sessions (yeah, I used a Battlefield headset with Call of Duty – so?!), and it's bound to become your favorite piece of gaming audio equipment. Pick up without hesitation.