At first, I thought Final Exam was going to be a goofy brawl-a-thon, like "What if the crew from the Mystery Machine picked up weapons and beat monsters the old-fashioned way, instead of all this deductiveness?" But as I got further into the game, I found that the goofy humor, whatever was intended to be there anyway, was given the backseat in favor of more commonplace monster combat, with a little bit of Metroidvania-style exploration thrown in. Is that a bad thing? Not entirely, but that does put a heavy burden on the product.

You play as one of four kids who find themselves facing off against a horde of monsters, using whatever weapons they can get their hands on – like chainsaws and wrenches – to fend them off. Along the way, they'll be able to use secondary weapons, like guns, grenades and even the monsters themselves for throwing – to try and stay alive.

While the controls are mostly responsive, especially when it comes to defensive rolls and gunplay, they also get quite repetitive. You'll discover your combos within just a few minutes of play, and, unfortunately, stick with them most of the time. Some new weapons do make things interesting, but you're essentially defeating monsters the same way. Only when something new is introduced to a stage – like moving on a train platform and having passing corridors destroy the oncoming monsters for you – do things liven up. And that isn't often enough.

What's worse, the exploration factor seems…dull. You'll work your way to objectives that are like miles away from where you need to go, only to deal with a lot of empty rooms. Then one or two monsters show up, you defeat them, and you go back into repeating the process. Some more consistency would have done this game a world of good, instead of just waiting for a ghoul to strike. The "attack rooms," where they gang up on you all at once, pose a challenge, but they don't happen nearly as often as they should.

Final Exam does redeem itself in one department – multiplayer. When you've got friends that can join up with you – locally or through online networking – you can complete more than one objective at a time, and work together in some terrific group combat. It definitely livens the game up, even if its exploration issues still remain in some spots.

The game as a whole can be beaten in a few hours, at best, and you can go through it again with another character, if you have the patience. But it doesn't offer too many rewards outside of that, aside from some new gear that may or may not entice you to see how it looks. We're betting on not. 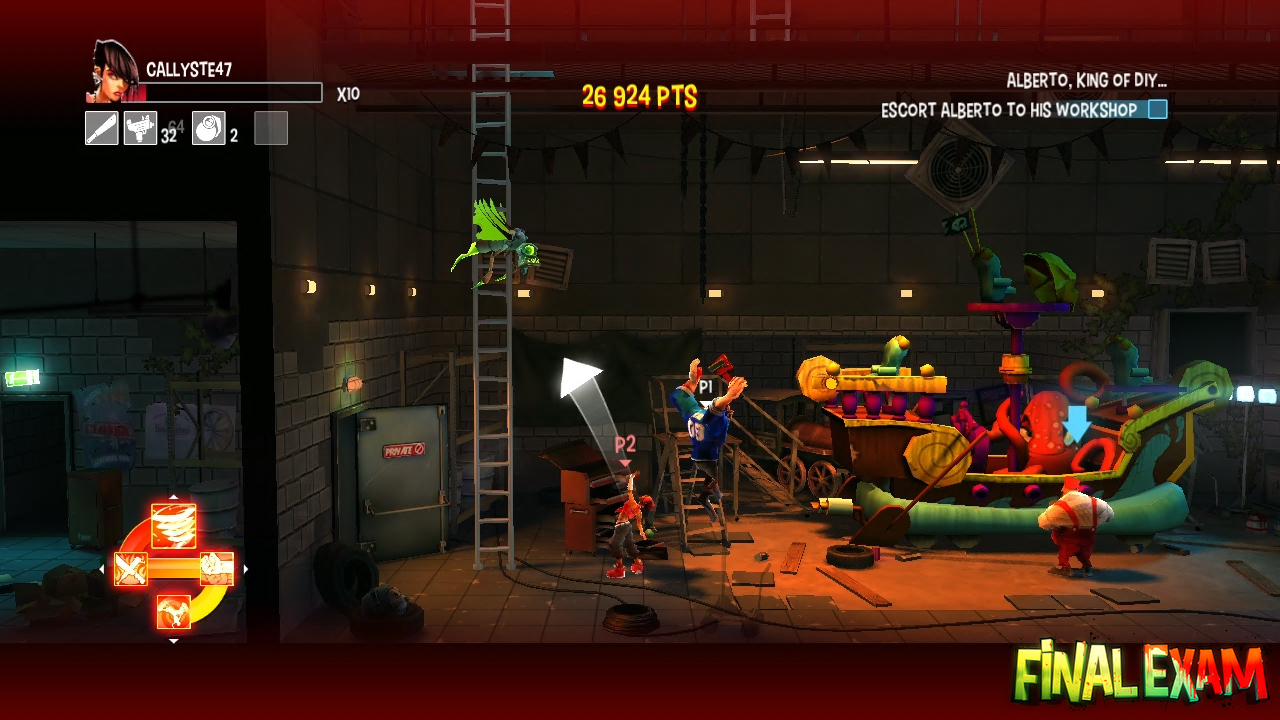 The presentation isn't bad – it's a typical 2.5-D set-up with decent animations and locales – but there's nothing that spells truly unique here. The same could go for the sound, which has repetitive audio effects and music that's mostly forgettable.

Had Final Exam picked up the pace and thrown everything and the kitchen sink at you, it would've fared much better. As it stands, it's more of an action game for the patient, and in need of lightening up. It's worth a try – especially if you've got your own Mystery Machine gang – but don't expect this Exam to reward you with a degree.

Based on the success of the first Surge!