Atlus is no stranger to quality fighting games, as you can probably recall the awesome Persona 4 Arena that came out a while back. But it follows it up with a quirky, less popular effort that nonetheless deserves its own audience – the likable Examu brawler Aquapazza: Aquaplus Dream Match.

Let's get something right off the bat here – very little makes sense in this game. The general plot point has some strange love potion being made by a witch, and all these random school characters getting together and having one-on-one battles, with secondary folks to call upon in the midst of battle. But it's fun in its own silly little way, like an anime that, as far as you believe, was translated by someone drunk.

The game focuses on 13 unique characters, as well as 13 secondaries that you can pair up however you please. They're a quirky bunch, featuring swordsmen, janitors, and even some girl who excels at carrying a stack of books and occasionally using them as projectiles. Part of the fun is discovering just what each character can do, and how solid their fighting mechanics are. Examu did wonderful work balancing them all out, so no one has a sizable advantage over the other.

In addition, the game features a robust fighting engine with a lot of systems to master, including Impact Guards, Resist Smash, and the new Active Emotion System, which can go a long way to turning around a fight with key blocks and powerful hits. Fighting fans will find a lot of depth here.

That's why I'm a little disappointed in the game's training mode. While it teaches you the standard basics on each of the characters, it never really provides depth in terms of how to master the systems. Rookies should have no problem and picking up and playing, but they'll have to experiment a bit to master everything.

Aquapazza has no shortage of modes, including Score Attack, Training, a pair of story modes (silly, as said above) and plenty of versus action online and off. The game ran fluidly with each match we took part in, even if the lobby wasn't as full as we'd prefer it to be. That opened up a lot of potential for local play, as this is a fighter you can easily enjoy with friends on the couch. You may get pre-occupied laughing so much at what's happening, but you'll have a good time nevertheless.

Like Persona 4 Arena before it, Aquapazza has a beautiful anime style presented throughout, with fluid animations, strong background action (the dance club is a particular favorite) and cute little anime pieces. It's not as stellar a show as some other games, but it's a happy visual parade in its own special way.

The same goes for the audio. The music is a joy to listen to, and really adds something special to the game. The voicework is kept in its traditional Japanese fashion, so you don't have to worry about dubbing. However, the squeakiness of some of the girls' voices could get on your nerves a little bit. Some may find them cute; others may want them to lose the match just so they'll shut up. 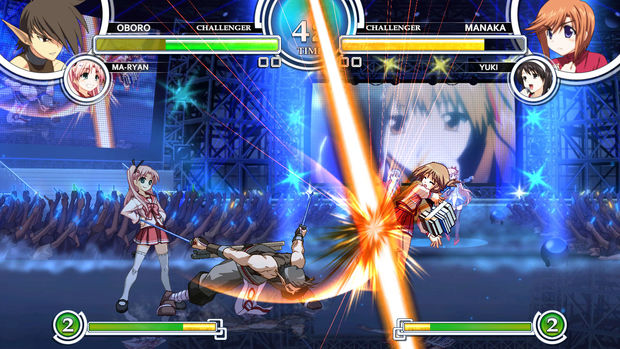 While Aquapazza may be overlooked by some in the wake of next-generation gaming this week, fighting fans and those who adore the world of anime shouldn't hesitate to pick it up. It's dirt cheap at $29.99, and offers an amazing amount of depth that fans of the genre will appreciate.

Plus, really, it's just so silly that it'll put a stupid grin on your face. The best kind of games can do that.

Preorder bonuses and other info revealed.

Solve A Murder In Thimbleweed Park

Solve the case on PlayStation 4!