The Legend of Zelda: A Link Between Worlds Is Picture-Perfect

If I recall correctly, The Legend of Zelda hasn't really had an average game in the bunch. Sure, The Adventures of Link was kind of a letdown for some people, but for others, it fit just fine in the Zelda universe. And then there was that...CD-I title. Forget that, it doesn't count.

However, I doubt that A Link Between Worlds will be having such a problem. It's easily one of the best games in the series to date, not to mention one of 2013's best portable efforts.

In the game, you play Link, who finds himself wrapped up in a heinous plot simply by trying to return a sword to a forgetful nobleman. It appears that a nasty character named Yuga is taking descendants from the seven sages and trapping them in paintings, all in the hopes of reviving Ganondorf. After brushing elbows with our hero, he does the same to him, trapping him in a canvas-like state.

However, the effect isn't permanent with Link, thanks to a magic bracelet that he had picked up before. In fact, the encounter leaves him with a newfound ability, being able to walk inside walls and other flat surfaces as a painting, and switching back and forth between worlds. This introduces an amazing new addition to the gameplay, one that really factors in well with puzzles. Stuck in a dead end in the real world? Transform into a painting and work your way through a wall crack to get to the other side. 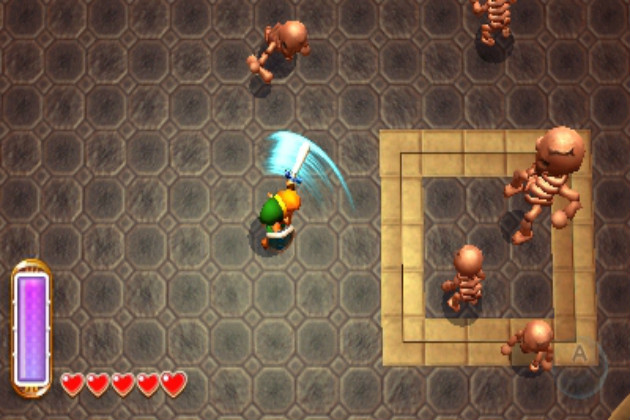 Thankfully, all of Link's other capabilities remain intact. The swordplay is as classic as it's always been, and the other weapons, like the boomerang and the bow and arrow set, are always welcome. They also have a neat "lending" system in place, as you'll talk to your new roommate buddy Ravio, a mischievous but well-meaning rabbit, to keep in supply of weapons. It may cost you a few rupees, but, thankfully, they're easy to come by, from knocking off enemies or tearing apart items in the environment.

A Link Between Worlds' land is massive and open for exploration, and objectives are easily marked on an overworld map that you can view however you see fit. The game by itself will last you several hours, and going through side areas to find treasure is always enjoyable, if only to swat around a few chickens with your sword. Yes, that retro-based staple from A Link To the Past remains firmly put here. Not to mention the dungeons – there are some excellent ones here.

The game also has the right balance of difficulty. You've got a meaty quest on your hands here, and some bosses will put up a tremendous fight. Thankfully, it's not the "impossible" kind of hard, and you'll always get a fair chance to come back and try again – in true Zelda fashion.

Visually, The Legend of Zelda: A Link Between Worlds is quite close in design to A Link To the Past, with its top-down view. However, this game employs a clever use in 3D in some places with rising and lowering platforms and other neat effects. Shifting between worlds also leaves an awesome effect, especially when Link is walking around in painting form. It's a sight to see.

The music is awesome, as always, and the sound effects, though minimal (Link doesn't exactly have a speaking role here – nor do the other characters), do what's needed.

There's barely any downside to A Link Between Worlds. Sure, it may seem like "we've seen this before" territory for A Link To the Past fans, but that's kind of the point. Nintendo wanted to recapture that spirit around an all-new adventure, and it's certainly gotten the job done. As stellar as Wind Waker HD was on the Wii U, A Link Between Worlds tops it as 2013's best Zelda game – and a benchmark in the series to boot.