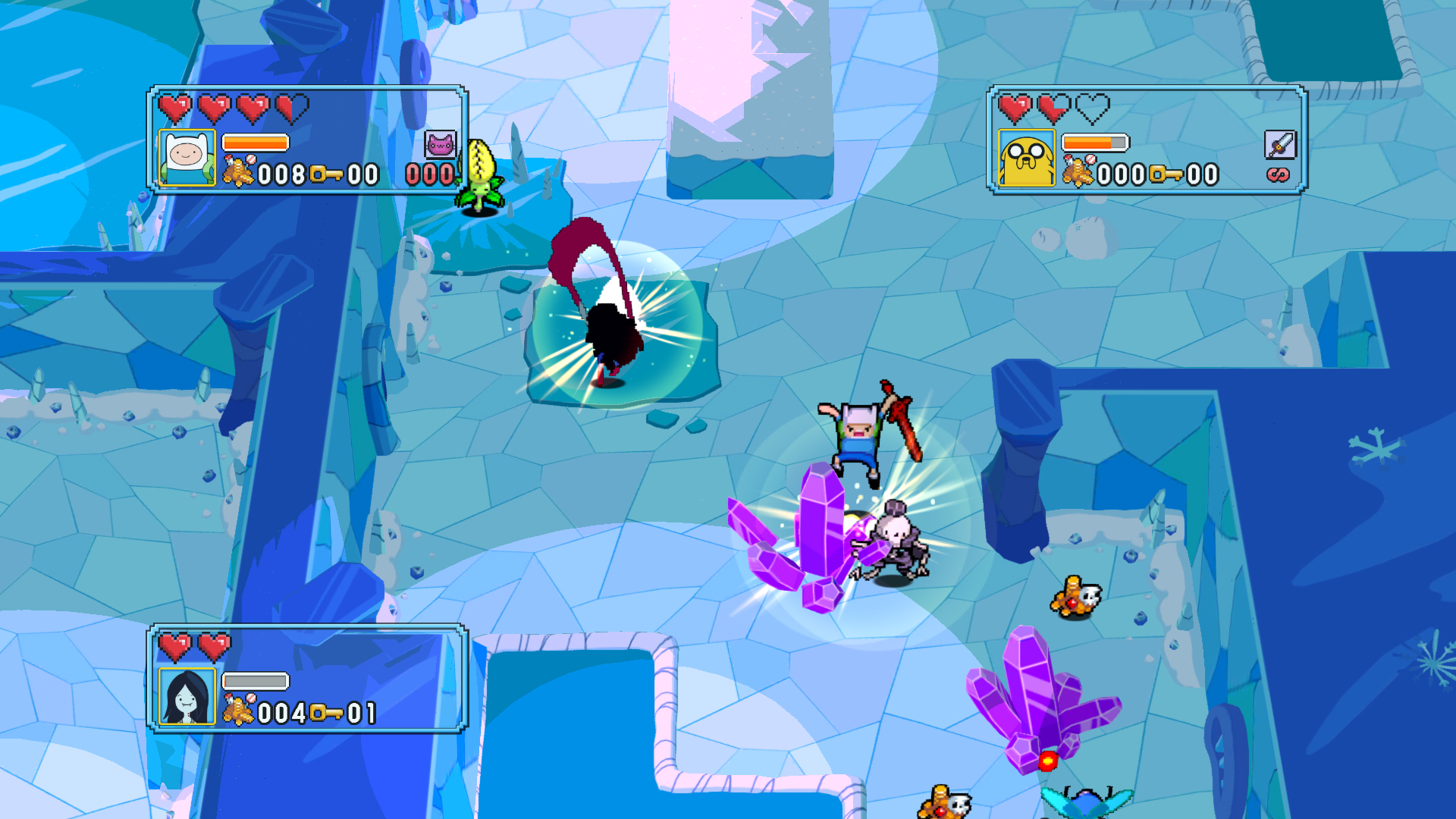 Last year, D3 Publisher did a pretty good job last year debuting Adventure Time in the video game world with the 3DS game Hey Ice King! Why'd You Steal Our Garbage?!  (No, really, that's what it's called.) But I had high hopes for its console debut with Explore the Dungeon Because I Don't Know!, a game that loosely utilizes the concept of the Atari classic Gauntlet, with a little dungeon crawling thrown in for good measure.

In the game, you play as Jake, Finn, or other secondary characters – though we're not sure what joy comes out of playing as a donut – as they roam through 100 dungeons filled with beasts and creatures that have escaped from the Princess' prison. Along the way, you can pick up additional items to fend them off, including a bamboo pole and rotten eggs. Because, hey, rotten eggs can defeat anything in the land of Jake and Finn, right?

It's a novel idea, and with WayForward behind it, I couldn't see how it would fail. But then I played it, and…well, I can see what the developer was going for, I just don't think it's the right vibe for this sort of game.

Here's the thing. The Gauntlet concept is cool, definitely. But fighting the same sort of enemies sporadically through dozens of dungeons, while going through item collecting that adds no real depth…it just drags. It would be one thing if you're facing hundreds of foes at once and face a "do or die" situation, but the way this is set up, you don't face too many enemies, and you don't have any sort of run function. That means it takes forever just to get through each stage.

The game is also missing the same level of personality as Hey Ice King! Sure, in the Wii U version, you have BMO smiling on your GamePad screen, shouting out random things. But Jake and Finn don't really face too many situations that are worthy of their adventure-like skills. It's just the same old dungeons, the same old action, and very little else. This game could've used a kick in the pants with more creative boss battles and multi-tiered dungeons with puzzles to solve. It's just too plain.

Single player is dull for a game like this, because, well, what's the fun of doing all the work yourself? Multiplayer is a little better, with four people taking part in the enemy-smacking madness. Unfortunately, their gameplay doesn't really evolve outside of secondary weapons, so don't be surprised if someone stifles a yawn after about a half hour of play.

WayForward did a pretty good job with the game's presentation, at least. As pain as the dungeons are, the animations are humorous, especially with Jake's wavy arms opening treasure chests. Still, more diversity would've been welcomed. At least the soundtrack is awesome, a listenable throwback to the yesteryear of 8-bit glory days. The developer's been on fire with this since their dual releases of DuckTales Remastered and Regular Show for 3DS earlier this year.

Adventure Time: Explore the Dungeon Because I Don't Know! is the sort of game with a novel idea that fits the show, but the execution that isn't quite there. Had there been more enemies, creativity in the dungeon design, and a bit more personality, it could've been right up there with the duo's previous effort. Instead, it's an average game that's worth a rental at best.

And last time I checked, average shouldn't be a word you use with Adventure Time.