LocoCycle Takes Players On A Short But Silly, Sweet Ride

I've been reading up on a few reviews of LocoCycle, Twisted Pixel's latest tour-de-force for the Xbox One, and, wow, harsh. Some people think it's downright racist, doing more digs than sticking its tongue firmly-in-cheek – and even pointing out that the gameplay is nothing short of shallow. It leaves me wondering if they may have forgotten who made this game, because, last time I checked, Twisted Pixel isn't a typical developer. These guys go off the deep end with each game they've done lately. 'Splosion Man, anyone?

With that in mind, I believe LocoCycle has merit. Is it the Xbox One game of the year? Hardly. But it is a humorous tour-de-force in shooting/driving/action fun, and even better once you find all the hidden content and carnage that you can unleash.

You portray I.R.I.S., a self-operating motorcycle who has a change of conscience following a Short Circuit-ish lightning attack. With her Mexican speaking compadre Pablo in tow (albeit by force), she vows to break free of the oppression, only to find her makers sending every known enemy her way – including a self-operated Harley/Davidson-esque bike named S.P.I.K.E., fittingly voiced by the T-1000 himself, Robert Patrick.

The weakest point of the game is probably I.R.I.S. herself. As much as I enjoy Lisa Foiles, who voices her, the character comes across as a little too naïve for her own good, not realizing the damage she's doing to Pablo dragging him behind her the whole time. If she had been injected with more personality and less odd one-liners, the ride would've been a lot better.

Regardless, LocoCycle works because of what surrounds I.R.I.S. over the course of the game. Enemies show up in all sorts of variations, from vehicles to skiers to killer robots to S.P.I.K.E.'s boss iterations. They're a lot of fun, and you can take them out in different ways – sometimes shooting, sometimes fighting, sometimes well-timed counters that leave 'em in the pavement.

Sometimes the action does get a little repetitive, but then a new challenge emerges that keeps things interesting. In addition, secondary tasks and hidden goods give you a reason to play through again, even if that means putting up with I.R.I.S.' quips all over again. Sometimes you have to take a little to get a little, y'know?

The game segments, which are a lot of fun, are surrounded by some great B-grade movie clips, featuring the likes of Tom Savini and Guardians of the Galaxy director James Gunn hamming it up as the story goes along. Sure, there are some odd jokes, but it's always a hammy, entertaining effort from Twisted Pixel. And, of course, it never hurts to have more beard jokes.

Along with exciting gameplay and a fun story, LocoCycle also has pretty good graphics. Not next level Xbox One stuff (Twisted Pixel probably made it this way to give the game an easy port to Xbox 360 next year), but better than usual for the studio. The 3D environments move along at a zippy pace, and the larger enemies are impressive to watch. 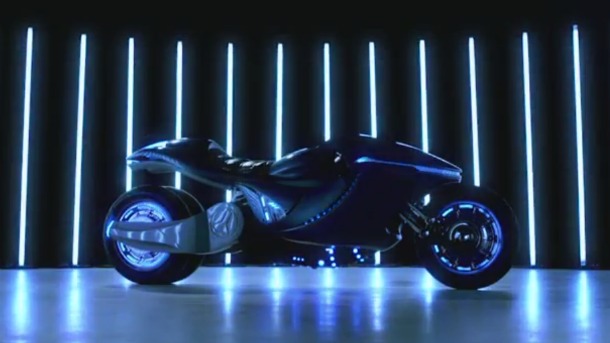 LocoCycle ends a little too soon for its own good, after just a few hours in, which makes the $19.99 price tag a little questionable -- $15 would've worked a little better. That said, you still get plenty of mileage out of the gameplay, as LocoCycle is a fun arcade-style romp with some fun story to go along with it. For those fearing anything less than the looniness we've come to expect from Twisted Pixel, never fear. It's here in spades. It's just a matter of how much you can take.