The Lone Ranger Is Hardly Wild In The West

When it came out in theaters back in July, I made fun of The Lone Ranger, because of all the negative reviews I had read and its poor box office performance. Still, I couldn't help but be curious – is it that bad? Could it possibly give After Earth a run for its money in awfulness? So, upon receiving the Blu-Ray/DVD package for review, I decided to give it a fair chance. After all, Johnny Depp's in it, so it can't completely suck, right? Um…right?

Anyway, the movie tells the story of Tonto (Depp, in bad old man make-up to start), who explains to a young kid at a 1930's carnival how he got to create his friendship with the Lone Ranger (Armie Hammer). Truth is, the Ranger was just a mere man who went with his brothers to hunt down a nasty heart-eating outlaw named Butch Cavendish (William Fichtner), only to be ambushed and left for dead.

As for the story goes on, Tonto attempts to help the Lone Ranger create his ghostly identity, and a lot of secondary characters are introduced, including Helena Bonham Carter as a plastic legged brothel owner, Barry Pepper as a cavalry officer who isn't what he seems, and Tom Wilkinson as Latham Cole, a mastermind of the railroad who has an alternate agenda.

Gore Verbinski, the director of the first three Pirates of the Caribbean movies, tries to inject the same energy into the Wild West. The problem is, it doesn't really work that well. First, the movie is quite excessive in length – almost two and a half hours – and doesn't really have much to say. It does have some humorous moments, but mostly it's ho-hum fare that just doesn't fill its content as well as the first Pirates did. Not even close.

Secondly, the fact that Depp is the main star and playing the secondary character, it never gives the Lone Ranger the opportunity he deserves to steal the show. As a result, he always feels like a rookie, rather than the infamous hero from years ago. Hammer does all right with the role, but with Depp firmly in charge and stealing the show, it's more like Tonto's Movie.

Finally, there are just too many slap-the-forehead moments in the movie. The plot barely makes any sense whatsoever, and there are some truly missed opportunities at character establishment. Some even vanish in the blink of an eye before they can do anything – like Stephen Root as the president of the Railroad federation.

The movie isn't completely without merit, though. The last 20 minutes are a fun, if somewhat unbelievable ride, a train chase that picks up the momentum that the first three quarters of the movie were clearly missing. That said, it still can't quite save it, and The Lone Ranger feels like a misstep, rather than a big leap forward for action fans.

At least there are some fun moments. Depp definitely gives his all as Tonto, and Fichtner has plenty of nastiness as Cavendish. That said, it all depends if you want to sit through two and a half hours to take it all in.

The film's technical presentation and audio on Blu-Ray is superb, and really does justice to your fine HDTV and surround sound equipment. However, the extras are rather lacking, with only a few promotional pieces, one deleted scene, and some really off-the-mark bloopers, poorly packaged. 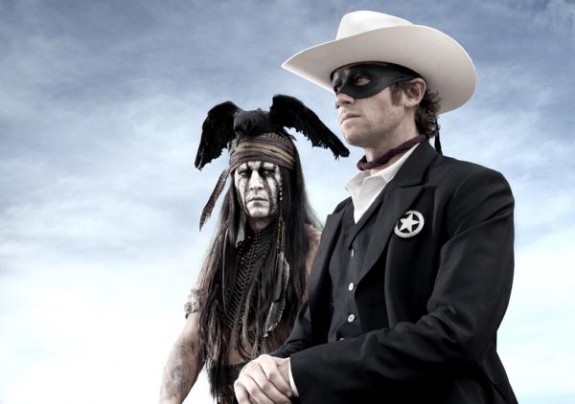 While I'm a bit pleased that The Lone Ranger isn't a complete waste of time like some of the other flicks I messed with this year – again, the last 20 minutes are a fun ride – I can't help but think it could've been way better with some key decisions, like better screen time for the Lone Ranger alongside Tonto and depleted running time. It's worth a curious rent, but Pirates in the Wild West, this ain't.

"Something very wrong with that horse."